Meeting was friendlier than previous encounters between the two Irish leaders 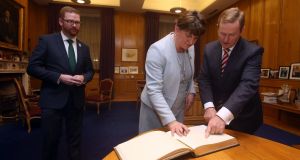 Northern Ireland First Minister Arlene Foster has denied saying the Government is poaching jobs from the North following the Brexit referendum, but said there is competition for foreign direct investment between the two jurisdictions.

Ms Foster also said she will not attend any future all-Ireland summits on Brexit organised by Taoiseach Enda Kenny but she will engage through the North-South Ministerial Council (NSMC).

Ms Foster met Mr Kenny to discuss Brexit at a meeting in Dublin on Tuesday night which marked the First Minister’s first visit to Government Buildings.

The meeting was warmer than previous encounters between the pair, such as when Ms Foster earlier this year rebuffed Mr Kenny’s invite to his last all-Ireland Brexit summit.

But the First Minister said she would “certainly” consider an invitation to speak to the Dáil or Seanad, similar to how Scottish first minister Nicola Sturgeon would address the Upper House this month.

“While they seek to take the views of people of Northern Ireland on the issue of Brexit at home, their representatives are sent out around the world to talk down our economy and to attempt to poach our investors.”

When asked about these comments following her meeting with Mr Kenny, Ms Foster said she did not use the term “poaching”, which she claimed was attributed to her by the media.

“Let me say this: we are not going to agree on everything. We are competitors in terms of foreign direct investment but what tonight’s meeting was about was those areas that we do want to agree on.

“Those areas that we think would be good for all of the people on this island, whether you live in Northern Ireland or the Republic of Ireland.”

Mr Kenny also said Northern Ireland and the Government would “always compete hard and fairly” for investment, adding: “You can’t win them all.”

The pair meet at the Remembrance Sunday services in Enniskillen at the weekend and will also meet once more this week at the NSMC in Armagh on Friday.

They both said meetings of the NSMC can take place more frequently if needed during the Brexit process.

Ms Foster declined to say if Northern Ireland could pursue a special status within the EU.

“We want our peoples to be able to move across the Border,” she said. “We want maximum access in relation to our goods and services as well.

Mr Kenny said the Government wants “an invisible border, progress being made by both economies and both peoples, where we would have a continuation of the support the EU has given over many years.

“There is a lot of common ground among us in these areas and the conclusion of our meeting really is to open continued lines of communication, to work in respect of the common ground we have here in the interests of the people of Ireland, with particular reference to the areas of common travel and the Border areas and the economies that are interlinked for so many years.”