Seanad meets in its temporary new home for the first time 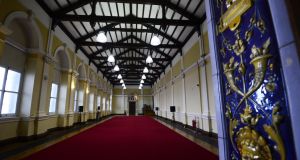 The Ceramic Room in the National Museum of Ireland, which will temporarily house the Seanad. Photograph: Cyril Byrne/The Irish Times

The Seanad is meeting on Tuesday for the first time in its temporary new home in the Ceramic Room of the National Museum of Ireland, next door to its usual base in Leinster House.

The move is necessary because of repair works being carried out in the Seanad chamber. The works are estimated to take 18 months.

The cost of preparing the Ceramic Room for the Seanad’s relocation was €1.2 million, just under the original estimate of €1.5 million.

Senators will continue to have access to their Leinster House offices.

A Dáil committee room was originally considered as a temporary location for the Upper House, but it was not deemed large enough.

“The museum is a temporary home and we are grateful for it,’’ said Cathaoirleach Denis O’Donovan.

The move caused controversy initially, with former museum director Pat Wallace saying his ex-colleagues were so upset about the Seanad’s temporary residency that they were weeping.

He said that, apart from the principle of violating a building that was the national archaeological museum and which housed the Ardagh Chalice, the Tara Brooch and the Cross of Cong, the museum was a central cultural institution.

An Taisce also expressed reservations about the move.

However, after negotiations between museum personnel and Leinster House authorities, the move was agreed.

Ceann Comhairle Seán Ó Fearghaíl conceded there was “considerable controversy’’about the move initially, adding that the Oireachtas was grateful to museum staff and other related parties.

Mr Ó Fearghaíl said a guarantee had been given to the museum that it would only house the Seanad for a temporary period.

The Oireachtas, it is understood, stressed the long-term benefits to the museum from the Seanad relocation, such as the installation of a lift and other renovations.