Biggest compromises were UK on £2bn fund, nationalists on welfare and unionists on parades 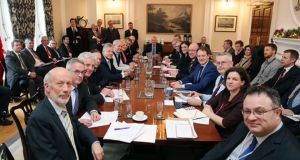 Politicians at Stormont after agreement on a range of disputes that had undermined powersharing in Northern Ireland. Photograph: Kelvin Boyes/Press Eye/PA Wire

The Stormont House Agreement, as it has been called, was agreed after a 12-week process, a few setbacks and a marathon continuous final session that lasted some 30 hours.

The agreement itself extends to 14 pages and comprises 75 headings.

In the broadest sense, the big compromises are the agreement by the British government to almost double its funding from £1 billion to £2 billion (€2.54bn) over 10 years.

And then for its part, the nationalist side (mainly Sinn Féin) has agreed to painful welfare “fines” (although it mollified the worst excesses), while unionist parties have agreed to sign up to variations of the structures regarding parades, flags and the past proposed by American diplomat Richard Haas in the failed talks last year.

The £2 billion package of additional spending powers includes £150 million to help fund the new bodies that will be established to investigate legacy issues as well as £500 million in capital funding for shared and integrated education over 10 years.

The welfare fines amount to £114 million for 2015 (these proposals were initially opposed by Sinn Féin) but, in a concession, the British government is willing to allow flexibility if the reforms are implemented in a timely fashion. This would involve freeing up capital funds earmarked for elsewhere to soften the blow of cuts.

The financial package has also included an agreement to allow the introduction of a 12.5 per cent corporation tax rate in the North in April 2017. Another quid pro quo for the Northern Executive will involve a major programme that will see the civil service and public sector downsized.

It will report by the end of 2016 and its recommendations will have a double lock which is very political in design – first, a requirement for majority approval; second, a proviso that five out of seven political members of the commission are in that majority.

On parades, it has been agreed the responsibility will be transferred from an independent parades commission to the Northern Ireland Assembly. The key offices working in tandem on this will be those of the First Minister and Deputy First Minister, as well as the Office of Legislative Counsel. The key issues will be addressed in legislative proposals this year.

In 2016, a new oral history archive will be established to allow people to share experiences from the Troubles. It will collect new material as well as draw together existing oral history projects. A mental trauma service will also be set up for victims and survivors.

While legacy inquests will continue as a separate project, a new historical investigations unit will consider all uncompleted cases. Families of victims will have the right to apply to have other cases considered for criminal investigation by the new unit. The unit has been given five-years in which to complete its work.

An commission on information retrieval is also being set up by both the British and Irish governments.

Its objective will be to allow “victims and survivors seek and privately receive information about the deaths of their next of kin during the Troubles”.

Running for five years, it will have an independent chair and four other members. They will be made up of nominees of the First Minster; the Deputy First Minister; the British government; and the Irish Government.

A key reform is the reduction in the number of Assembly members by 18, reducing the number per constituency from six to five. Departments will be cut from 12 to nine.