State of the parties: FF emerges as the big mover 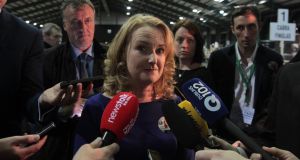 With over 600 of the 949 city and council seats filled, there have been some dramatic trends emerging on the second day of the count.

Perhaps the most interesting is that the biggest mover nationally hasn’t been Sinn Féin but Fianna Fáil, which has jumped over seven points from its 2011 showing of 17 per cent and looks like taking in almost 25 per cent of the vote.

Sinn Féin is also up but its national showing, while respectable, is certainly not as spectacular or ‘game-changing’ as has been suggested.

Sure the party has done amazingly well in Dublin and would have won more seats in the capital if it had run more candidates.

But outside of Dublin its gains have been much more modest.

On the other side of the coin, the focus has been very much on the Labour Party and the precipitous fall in support it has endured.

But Fine Gael has also taken a huge hit, down some 12 per cent on its general election showing and also eight points why of its 2009 vote share which was 32 per cent.

Of interest too, has been the performance of smaller parties.

People Before Profit and the Anti Austerity Alliance have done tremendously well in Dublin with some high quality breakthrough candidates including Tracy McVeigh in the South Inner City.

Likewise the Greens have made a very strong comeback after two abysmal elections. Patrick Costello topped the poll in Rathmines and Rathgar and another strong breakthrough candidate Claire Byrne won a seat in Pembroke.

Nationally the party may return 10 councillors which is a great result for it, given the routing it received in 2011.

The first counts from the European Elections are expected late this evening - the tallies have been sporadic and piecemeal meaning that there is little solid intelligence. There has been a lot of speculation that Simon Harris may be one to watch in the South but this assessment is based on partial tallies.

Fine Gael has had a poor election, even though Taoiseach Enda Kenny did his best to talk it down last night.

The party came into the election with 335 councils seats but has seen its vote share tumble.

With 23 per cent share of the vote it could see a seat loss of some 100 councillors. If the party fails to win four seats in the European elections, then questions will be asked about its electoral strategy and whether it was complacent.

Eamon Coghlan was a disappointment in Dublin West. Fine Gael also had a very bad day in Dublin City where its number of councillors fell to eight; four of whom are based in Dublin South East.

A lot of attention has been focused on European elections, where its performance will at best reasonable. But on a local level, Fianna Fáil has been the big winner in the election, outperforming even Sinn Féin compared to 2011.

With 25 per cent of the vote, the party has improved by seven percentage points since 2011 and its figure is now likely to be comparable with that of Fine Gael.

It will at least equal its 2009 performance and may return upwards of 250 seats, making it the biggest party in the country at local level.

However, while Mary Fitzpatrick is considered a slightly long shot in Dublin at this stage, if Fianna Fáil fails to win a seat in Midlands North West it will certainly take the gloss of a good day for the party.

John McGuinness said today the leadership of the party is now an issue but his view would not be widely shared within the wider party.

It’s been a terrible election for Labour. It has taking a battering comparable to that taken by Fianna Fáil and the Greens in 2011. While the drop in support is slightly smaller than that of Fine Gael, the consequences are devastating as it had a smaller support base.

Its baseline support figure of 7 per cent is lower than at any other time since the middle 1980s. It is under attack in working class areas from Sinn Féin and smaller socialist parties and in middle class areas by the Greens and by independents.

There has been very little compensating factors for the party: some of its incumbents did very well to hold on but too few new candidates made a breakthrough.

There are no two ways about it: it’s been a magnificent election for Sinn Féin, especially in the capital. It’s now the largest party on Dublin City Council and it has made big breakthroughs in the previously barren councils of Fingal and Dun Laoghaire-Rathdown.

The cherry on the cake in Dublin will be an enormous victory for Lynn Boylan in the European elections. The party is now established as the biggest in Dublin. But elsewhere the results have been good but less than spectacular.

Its overall percentage share of votes is 15 per cent which is good but hardly as vertiginous as the 20 per cent plus that was shown in polls.

And if Matt Carthy’s hopes are eclipsed by Luke ‘Ming’ Flanagan in Midlands North West, it will take some of the sheen away.

That said, the party has got its people elected in places where it never had a presence before. That should give it a strong base to get many new TDs elected in 2016.

It’s also been a very good weekend for this group, all of which have made gains. Support for independent TDs has increased by seven percent and it looks like at least 200 of the 945 new councillors will be non-aligned.

The Greens have also made a big comeback from its dreadful election in 2009 where it lost all but three of its county councillors.

The party can conceivably win 10 seats, and has re-established a presence on all four Dublin local authorities... with three councillors on Dublin City Council. Party leader Eamon Ryan is also in with a real chance of winning a European seat in Dublin.

The smaller socialist parties have also made substantial inroads in Dublin. Ruth Coppinger of the Socialist Party/Anti Austerity Alliance won the Dublin West byelection and the party also made gains in Fingal.

On the other side of the city People Before Profit has four councillors in Dun Laoghaire Rathdown and has also increased its representation on Dublin City Council.