South Down: Jim Wells to take legal action against those who ‘sought to destroy’ him 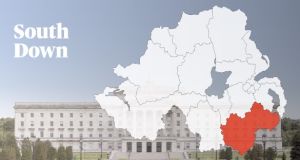 Former DUP health minister Jim Wells, who was embroiled in a series of controversies in the last term, was re-elected in South Down.

The 2016 Stormont elections brought little change to South Down as all parties retained the same number of seats from the previous Assembly – although there was some notable movement in party support.

What was a largely mundane competition ostensibly went on to become the Jim Wells show as the former DUP minister for health announced his intention to lodge a complaint with the Electoral Office and to take legal action against people who “sought to destroy” him at various junctures during the count at Lagan Valley Leisureplex.

Mr Wells was the first candidate to be returned in the constituency after the third count, but he took issue with the treatment of his disabled wife, Grace, who he said had been denied access to the count floor.

“I’ve brought my wife from her care home to witness me being elected, and she’s sitting up in the corner and they will not bend one iota to let her in. That’s scandalous treatment of the disabled,” he said following his election. “We’re making a formal complaint to the Electoral Office who have a totally intransigent attitude to the disabled. This is not on.”

Wells, who is an evangelical Christian, became embroiled in various rows over same-sex couples which blighted his unsuccessful Westminster campaign last year, but said he has now been vindicated in the eyes of his supporters.

In electoral terms, the major story of the day was the continued erosion of the SDLP’s support in the constituency which saw it slip to within 200 votes of Sinn Féin overall.

Chris Hazzard and Caitríona Ruane both gained re-election for Sinn Féin, as did Sinead Bradley for the SDLP, whose running-mate Colin McGrath claimed the last seat at the expense of long-serving fellow colleague Seán Rogers.

The SDLP was over 2,000 votes ahead of Sinn Féin in the 2011 Assembly election, and Ms Ruane indicated her party is seeking to make further inroads in South Down in the coming years.

“There’s very little between us and the SDLP now, and we’re ready and waiting for the next election,” she said.

Poll-topper Ms Bradley expressed her “surprise” at finishing with over 5,000 votes, and retorted that this is “a first step forward in reversing the fate of the SDLP in South Down”.

The UUP’s Harold McKee claimed the second unionist seat in the constituency, and was a beneficiary of a collapse in support for outgoing MLA John McCallister.

McCallister saw his support founder, many suspect as a result of his ill-fated association with the now-defunct NI21 party following his defection from the UUP, and his Independent candidacy attracted just over a thousand votes, leading to a first count elimination.