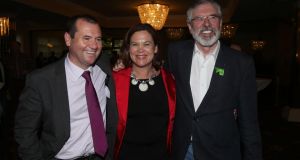 As this weekend’s votes are tallied across the 28 member states of the EU, anti-establishment, Eurosceptic parties are set to make significant gains. Many voters blame the EU for the economic crisis and the austerity policies that followed, and have turned towards parties that want to roll back on EU integration.

Over the years, Sinn Féin’s position has been the most Eurosceptic of the major Irish parties. However, we would argue that Sinn Féin’s current position on the EU is quite nuanced, especially when compared to parties that wish to take their countries out the EU such as UKIP.

Overall, Sinn Féin’s attitude towards the EU can be described as one of “critical engagement”. The party acknowledges the economic benefits of membership, so does not advocate leaving the EU or the Eurozone. Rather, it is a nationalist party that seeks to limit the extent to which supranational institutions like the Commission take power away from national governments.

While Sinn Féin is therefore not a strongly Eurosceptic party, it is possible that voters who turned to Sinn Féin in this election were motivated by opposition to the EU. After all, Ireland has suffered considerably more than most other member states during the Eurozone crisis.

We can investigate whether or not this was the case by looking at the responses of over 10,000 Irish people who completed an online survey on the EUVOX vote advice website during the election campaign. By answering a series of questions on policy issues, voters could see where they stood in relation to the main political parties. The survey was anonymous, but we did ask users which party they intended to vote for. We can look at their responses to see whether or not Sinn Féin supporters stand out from other voters in terms of their attitudes towards the EU.

This evidence from our survey does not suggest that the Sinn Féin vote was a vote against the EU. Like supporters of the other parties, the majority of Sinn Féin voters who responded to the survey believed that membership of the EU has been a good thing for Ireland. Furthermore, most Sinn Féin voters were not opposed to citizens from other EU member states coming to work in Ireland.

In these respects Sinn Féin voters stand in stark contrast to those who voted for genuinely Eurosceptic parties in other countries. For instance, among UKIP voters who responded to the EUVOX survey (it ran in all member states), the vast majority believed that EU membership was bad for the UK and that the rights of EU citizens to work in Britain should be restricted.

In fact, Sinn Féin voters appear to be broadly in line with their party’s “critical engagement” stance on Europe. They were more likely than other respondents to agree that a single member state should be able to block an EU treaty; and they were more likely to oppose a common EU foreign policy.

The area where Sinn Féin voters stand out most compared to the rest of the electorate is their attitude towards the government’s fiscal policies. When asked whether the local property tax should be scrapped, Sinn Féin voters were far more likely to agree than voters from the other major parties. Seventy per cent of Sinn Féin voters agreed with this statement, compared to only 37 per cent of other respondents. We saw similar figures when we analysed questions on water charges.

It would be a mistake, therefore, to interpret the gains made by Sinn Féin as evidence of growing anti-EU sentiment in Ireland. Instead, Sinn Féin’s strong anti-austerity position, which they have consistently voiced in the aftermath of the 2008 economic collapse, appears to be the best explanation of their surging popularity in the Irish electorate.

- Rory Costello is a lecturer in the Department of Politics and Public Administration at the University of Limerick.