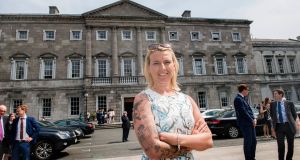 The proposed introduction of a third-level student loan scheme has been criticised by Independent Senator Marie-Louise O’Donnell.

“The idea of asking students for loans . . . and the way the banks have treated graduates and undergraduates in this country, is absolutely outrageous,’’ she said. “You could not write it down.’’

Ms O’Donnell told the Seanad that banks were “rocking up’’ to university campuses and setting up stalls, in order to ask students and their parents to take out loans.

When students qualified, the interest on the loans was then raised, she said.

Ms O’Donnell said that, after a two-year review, the Cassells report on the future of higher education funding could only come up with three options.

“This is extraordinary: either keep up the current fee system and raise the fees, abolish the fees or have loans,’’ she said.

She said she could not understand why there had been no in-depth analysis of proper means testing for third-level education.

Ms O’Donnell said she would like some proof that universities needed “all this money’’.

Ms O’Donnell said Minister for Education Richard Bruton should be invited to the Seanad to have a debate on the findings of the Cassells report.

Independent Senator Lynn Ruane said the report needed to be debated by the Seanad, although it had only laid out three options.

She said it had been said in the media in recent days that free third-level education had failed because it had not led to an influx of people from minority or working class backgrounds.

Ms Ruane said the reason for this was the failure to address the years of oppression and inequality that had prevented these groups from realising that free college education was available.

“I know what it has given me,’’ she said. “If it had been necessary for me to take out an income-contingent loan, or if I had to pay for my education, I would not be in the position I am in.’’

She said she agreed with the principle that education was a right rather than a privilege.

“In the same way as Donogh O’Malley provided for free secondary education in this country, which was a revolutionary move at the time, we should move back to that system and reject the proposal for a deferred payment loan system, as proposed in the other options.”