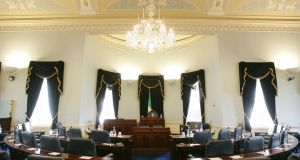 The Government has dismissed claims by pro-Seanad campaigners that it is overstating the potential savings to be made by closing the Upper House.

At issue is the contention of Fine Gael director of elections in the referendum Richard Bruton that abolition would save €20 million per year or €100 million over a parliamentary term.

Seanad retention campaigners say that is plain wrong. They argue that clerk of the Dáil Kieran Coughlan told the Public Accounts Committee that the actual direct saving would be less than €10 million because the State would still bear many indirect costs attributable to the Seanad.

“This plucking of figures out of the air to try and justify what is a crude, ill-thought-out attempt to abolish the Seanad may be populist but the savings arguments simply do not stand up to scrutiny,” said the Democracy Matters group, whose leaders include former Tánaiste Michael McDowell.

Transferred
Answering Independent TD Shane Ross in January 2012, Mr Coughlan agreed with the TD’s suggestion that indirect “staff costs” would be transferred within the State system if the Seanad was scrapped.

Fine Gael argues, however, that Mr Bruton’s figures were supplied by the Houses of the Oireachtas. The €20 million figure was cited first by Taoiseach Enda Kenny when he opened the referendum campaign last month.

Minister of State for Finance Brian Hayes said: “I don’t think the €20 million figure is exaggerated. It breaks down to €9 million in salaries, €8 million in indirect costs and €2 million on pensions. But the cost is not the principal issue here, the issue is whether we need the Seanad or not.”

Figures supplied to Fine Gael for 2012 show that salary costs for the 60 Seanad members were €4.2 million.

This includes telephone expenditure on calls made outside Leinster House, including line rental and mobile calls. The staff costs of their 60 secretarial assistants were €2.1 million.

Indirect costs
Indirect costs include €1.9 million per year on information and communications technology. This amounts to €15,833 for each Senator and each secretarial assistant.

Indirect costs also include €1.6 million attributable to the Superintendent of the Houses of the Oireachtas. This includes expenditure on ushers in Leinster House, security and cleaners.

Such costs also include €2.8 million attributable to the Procedural Sections of the Houses.

This includes the work of the Bills Office, which deals with the processing and consideration of legislation and the tabling of amendments to legislation.

It also includes the work of the Journal Office, which prepares the journal of proceedings and standing orders.

A further €3 million is attributable to “other support sections”, including printing, the Oireachtas library, translation services, procurement, stationery and work for interparliamentary bodies.