Seanad likely to be recalled to discuss law on organ donation 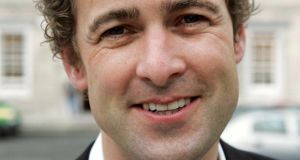 Fianna Fáil senator Mark Daly who has secured the signatures of one third of Senators supporting recall of the Seanad.

The Seanad is likely to be recalled from holidays before the end of this month to discuss the law on organ donation which is covered by an EU directive.

Fianna Fáil senator Mark Daly has secured the signatures of one third of the Seanad members supporting his campaign for a recall.

Today he secured the signature of Senator Fergal Quinn bringing the number of senators backing his case up to the required 20.

In a statement Mr Daly said under the European Communities Act 1974 the Seanad must be recalled to debate an EU Directive if 20 senators sign a letter asking for a recall.

He said he had been illegally and unlawfully blocked from recalling the Seanad on the same legislation last year.

The legislation to be debated was the first legislation on organ donation in the history of the State yet it was not debated by the Dáil, Senate or health committee prior to the Minister signing the EU law into Irish legislation.

The law has seriously flaws according to groups advocating for those on organ transplant waiting lists around the country.

“There are currently over 650 people in Ireland awaiting organ transplants including heart, lung, liver, kidney and pancreas. There are more than 1,800 people who are receiving life-sustaining dialysis in this country at a cost over 10 years of €1.2 billion.

“If we improved our organ transplant system in this country, the over 500 people waiting for kidney transplants could expect to receiving a life-transforming and saving operation. The resulting saving to the taxpayer over time would be 325,000,000 million. The Minister missed an opportunity to fix our organ transplantation system.”

Senator Daly said having secured one third of the Seanad he will be submitting the signed letter to the Cathaoirleach of the Seanad Paddy Burke this week.

“In the event of the Government not recalling the Seanad this time I will go to the High Court and seek Court Order forcing the Government to comply with the law of the land,” he said.

“What the minister should have done is he should have followed the example of Croatia, who are the best in Europe on organ transplantation.

“ He should have put transplant coordinators in every hospital, allowed for data sharing among state agencies, appointed one competent authority on organ donation and transplantation and had a debate on the difficult issue of consent”.