Scottish National Party, which has left Labour with just one of the 41 seats it held in 2010. Ruadhán Mac Cormaic reports. Photographs: Reuters 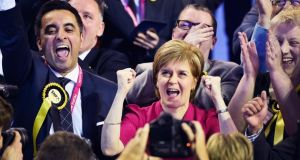 SNP leader Nicola Sturgeon celebrates in Glasgow as her party secured 56 out of the 59 seats in Scotland. Photograph: Getty

The Scottish National Party is on course for a historic landslide after a spectacular surge for Nicola Sturgeon’s party all but wiped out Labour north of the border.

All but three of Scotland’s 59 seats were won by the SNP, whose commanding vote ousted Scottish Labour leader Jim Murphy and a number of prominent Liberal Democrats. The outcome will cast fresh doubts on the future of the union and bring about a realignment of British politics.

Commanding double-digit victory margins were a feature of the SNP’s performance. Its candidate won by 10,000 votes in Kirkcaldy and Cowdenbeath, which was once seen as Labour’s safest seat in the country, and which had been held by former prime minister Gordon Brown. In Glasgow North East the swing to the SNP was a record 39 per cent.

“The Scottish Lion has roared this morning across the country,” said former SNP leader Alex Salmond, who was elected in the Gordon constituency. Ms Sturgeon, his successor, said the results were “historic” and that she was “immensely proud” of her party’s candidates.

Labour leader Ed Miliband said his party had been “overwhelmed” by a “surge of nationalism” in Scotland.

The result is by far the most successful in the SNP’s history. Its previous best was in 1974, when it won 11 seats. The party won six seats in 2010.

In Glasgow it had a clean sweep of all seven seats, defeating Labour’s shadow Scottish secretary Margaret Curran in the process.

Across Scotland it claimed seats that had been in Labour or Lib Dem hands for decades. Kilmarnock and Loudoun, a Labour seat for the past 18 years, elected the SNP’s Alan Brown with 30,000 votes - almost double the number of votes that went to the shadow economic secretary Cathy Jamieson. Another scalp was the Lib Dem employment minister, who was defeated by the SNP candidate John Nicolson in East Dunbartonshire.

Turnout was high across Scotland, with several constituencies reporting turnouts in excess on 70 per cent and some at more than 80 per cent.

Speaking as she arrived at the Glasgow count centre before the scale of the Conservative had become clear, Ms Sturgeon said she remained “ready and willing” to work with Labour to lock prime minister David Cameron out of Downing Street.

“If that proves not to be the case because Labour failed to beat the Conservatives in England, then SNP MPs will go to Westminster to stand up for Scotland and to protect Scotland against a Tory government, but I still hope we can have a situation where we can lock David Cameron out of Downing Street,” she said.

The only seats which the SNP has not won so far are Orkney and Shetland, Edinburgh South and Dumfriesshire, Clydesdale and Tweeddale, where Liberal Democrat Alistair Carmichael, Labour’s Ian Murray and Conservative David Mundell held on.

But in a warning to Ms Sturgeon, he said: “This is of course an enormous moment for the SNP; no one can deny that. With victory on this scale, of course, also comes a responsibility. No one should ever confuse nationalism for their nation, no one should mistake your party for your country, because our nation, our streets, our flag won’t ever belong to one particular party or one particular cause.”