Scarlet robes and Opposition on red alert as Dáil returns

Miriam Lord: It wasn’t long before Leo was banging the drum for people in the middle

After the summer recess the Dáil returned to protests over the Eight Amendment and the ongoing homelessness crisis. 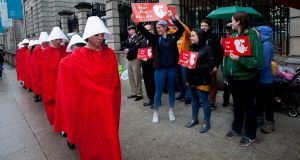 For the opening day of the autumn Dáil session, after a 10-week break from parliamentary action, five backbench government TDs managed to drag themselves into the chamber for the afternoon start of business.

This paltry turnout for Leaders’ Questions gradually swelled until Leo’s crowd hit the magnificent total of nine. Could the rest of them not have made an effort to show their faces on the inaugural outing of the season? If nothing else but to demonstrate support for the Government, the work it intends to do and their confidence in a new leader facing into his first full stretch at the helm?

It didn’t look good, even if four of them could be excused due to their attendance at the Oireachtas committee hearing into the Eighth Amendment.

At least the Opposition benches, by comparison, were very well populated.

Maybe some of those absent Fine Gael TDs are still feeling sore at being passed over for jobs by Leo Varadkar. Or maybe they can’t be bothered listening to the same old back and forth on the same old issues with the unforgiving stopwatch dictating the pace.

Arresting scenes outside the gates of Leinster House before proceedings began provided more colour and food for thought than what would soon transpire in the chamber beyond.

Lines of women dressed in scarlet robes and white bonnets stood to one side of the entrance in a protest inspired by The Handmaid’s Tale, Margaret Atwood’s novel of female enslavement which is now a hit television series. They were marking the first meeting of the committee examining the Eighth Amendment, which places a pregnant woman’s right to life on an equal footing with the life of the foetus she is carrying, and calling on it to abide by the pro-choice recommendations of the recent Citizens’ Assembly which considered the issue.

On the other side of the gate, another group holding red and white posters and diametrically opposing views, mounted an anti-abortion protest with a “Stop the Killing” message for committee members.

Then there was a third group from the “My Name Is” campaign. They brought along a tiny house covered with childrens’ faces and names representing the many children in Ireland today who are homeless.

And the homeless crisis was first on the agenda when the new Dáil season began.

Fianna Fáil leader Micheál Martin blasted Leo Varadkar over the inadequacy of his Government’s latest policy. There is “no plan” he said. The policy isn’t working. The situation is getting progressively worse.

Does he accept this is the case?

The Taoiseach had all his answers ready. And why wouldn’t he? Martin came in with questions which filled most of the bare Summer current affairs shows over the long break. The subject has been discussed inside out and upside down in the last few months.

Varadkar’s replies were as well rehearsed and his rolling out of deadlines and figures was predictable. On his very first reply, he became frustrated by Opposition interruptions.

“I see we are going to see a repeat of the same pattern where people are allowed to ask questions, they are treated with respect, but the minute you give a reply that they don’t want heard, you get interrupted right away.”

Fianna Fail’s Dara Calleary came out with an interesting retort.

“Maybe you should give an answer instead of a reply.”

That was a bit of a puzzler.

But perhaps Calleary was giving an excellent summary of the relationship between Fianna Fail and the Government, and an insight into the type of negotiations his party and the administration it is keeping in power will be getting into in the run up to the budget.

It’s only three weeks away.

You say “answer”. We say “reply”. And so on. Micheál and his crew may have pledged their support, yet they have to remain relevant and distinct.

Gerry Adams was first in with a swipe at Leo’s new catchphrase “Republic of Opportunity.” A missed opportunity on Micheál’s part.

“What about a republic of equals?” he asked on behalf of people with disabilities.

“Can we have an “Equality Yes” campaign for these citizens as well?”

“Of course, we all believe in these things and we all believe in maximising the opportunities for them. And, you know, your own party has been in and out of government in Northern Ireland for most of the last 20 years but look at what payments are made to people with disabilities there . . . Look at the cutbacks that social care trusts are now making in Northern Ireland.”

Adams bridled. “And that excuses your conduct?”

A snort went up from somewhere in the Fine Gael ranks.

It was back to more familiar territory for the Labour leader, who wanted to talk about the budget. There is nothing Brendan Howlin loves more than talking about budgets. With so little money to play around with, he wants the Government to put what it has into improving public services, rather than spending it on tax cuts which will give negligible take-home increases to middle bracket earners.

Starting as he so very clearly means to go on, it wasn’t long before Leo was banging the drum for the people in the middle.

“Is it not now right that we say to people who are in the middle- income bracket and who still pay USC and income tax, and who feel very often that they pay for everything and get very little in return, there should be something in this budget for them as well?”

They had an exchange over cuts versus spending, with the Taoiseach sounding like he was taking part in a university debating competition. Until he got annoyed again by all the interruptions.

“You’ll have to get used to this,” added Michael Healy-Rae.

“You need to be thicker skinned,” advised Dooley.

This might be a job for the new Special Communications Unit.