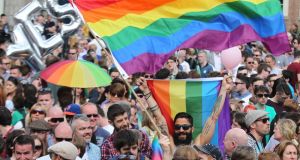 The historic Yes vote in Ireland’s same-sex marriage referendum leaves the North as the last bastion of discrimination against gay people, according to Amnesty International.

Northern Ireland is now the only region in the UK and Ireland not to extend civil marriage rights to same-sex couples.

According to Amnesty’s Northern Ireland programme director Patrick Corrigan: “This historic result will echo around the world - it shows how a once socially-conservative country can transform itself into a beacon of equality.

“Northern Ireland is now the last bastion of discrimination against gay people in these islands.

“Northern Ireland’s discriminatory laws are a badge of shame - not to be worn by the people of Northern Ireland, a majority of whom support same-sex marriage, but by those politicians who oppose equal treatment for the LGBTI community.

“The Northern Ireland Executive should waste no more time in fulfilling its first duty to its people – to ensure that none are treated as second-class citizens.”

“Today we can all rightfully be proud to be Irish and part of an increasingly tolerant, pluralist and outward-looking Ireland,” he said.

“Politicians, particularly in the North need to reflect on this progress. The world is moving on and Ireland is taking the lead. Pride in Ireland has taken on a whole new meaning.”

“Sinn Féin will continue to campaign for marriage equality for all in the North and to end the discrimination against our LGBTI community.”

“As a result of the referendum result, Ireland now goes forward as a much fairer place for people to live, work and do business - regardless of class, creed or sexual orientation,” he said.

SDLP MLA Colum Eastwood said the yes vote marked an historic moment for Ireland. “The North should be a bastion of respect for diversity,” he added.

“We must all redouble our efforts to support equality and press for recognition of civil marriage across these islands. We made history and set an example for the rest of the world before, we can do it again.”

Alliance party president, Cllr Andrew Muir, said: “This is a momentous day for supporters of equal civil marriage and a massive step forward for equality. The people of Ireland should be proud of what they have achieved.

“For years I struggled with my own sexuality but in 1996 I finally found the courage to come out, stepping forward later as a visible civic leader, who happens to be gay.

Nineteen years later I am ecstatic and emotional to see Ireland take such a transformative step forward by voting Yes to Marriage Equality, signifying a changed nation which includes and values lesbian and gay people as equal citizens. It has been heart-warming to receive many messages of support from family, friends and constituents celebrating this historic moment.

“This result now means that Northern Ireland is the only region in these isles that has not legalised equal civil marriage. There must now be great pressure brought to ensure that we follow suit.

“Whilst the NI Assembly has blocked progress to date, I am confident that in the context of this watershed moment we shall also overcome in Northern Ireland and also secure equal civil marriage in the years ahead whether via the Assembly, Westminster or the courts. Nobody ever thought previous legal changes would have been possible but with courage and commitment, equality was delivered. Momentum to build a truly shared, inclusive and equal society is growing daily.

Four motions in favour of legislating for same-sex marriage have been rejected at Stormont in recent times.

“The issue before voters was an intensely emotive one and to express the historic view of marriage during the referendum campaign often brought hostility and rejection.

“We hope that those who continue to uphold this view will not be marginalised or demeaned.

“We would also encourage all Christians to love their neighbours – as the Bible calls us to do – particularly those with whom we might disagree and if demeaned, to turn the other cheek, for Jesus’ sake.

“While the result is a significant change for Irish Society, as a Church we will continue to reach out to all people, whatever their situation, as all are equally welcome.

“Whilst reaffirming our understanding of marriage as exclusively between one man and one woman, we pray for wisdom for the Government and urge it to consult faith groups over the coming months as it formulates the necessary subsequent legislation.”

A statement from the Church of Ireland said it defines marriage as between a man and a woman, and the result of this referendum does not alter this. “The church has often existed, in history, with different views from those adopted by the state, and has sought to live with both conviction and good relationships with the civil authorities and communities in which it is set,a statement said. “Marriage services taking place in a Church of Ireland church, or conducted by a minister of the Church of Ireland may – in compliance with church teaching, liturgy and canon law – continue to celebrate only marriage between a man and a woman. “We would now sincerely urge a spirit of public generosity, both from those for whom the result of the referendum represents triumph, and from those for whom it signifies disaster.”

June march
On Saturday, Amnesty announced a march in Belfast on June 13th calling for legislation for same-sex marriage in the North. Mr Corrigan says people are “sick of living in a discriminatory backwater for gay people”.

“Most people want to live in a country where such discrimination is consigned to the dustbin of history,” he added.

“They want to live in a place where all citizens are guaranteed equal rights and equal opportunities – that’s the message of the march for equality.”

The rally is being organised jointly by Amnesty, the Irish Congress of Trade Unions and the North’s largest LGBTI support group The Rainbow Project.

“We are all simply elated at this stunning, landslide victory for our sisters and brothers in the Republic,” said John O’Doherty, director of The Rainbow Project.

“They have brought Ireland on a journey of acceptance and they have done so with grace, compassion and good humour.”

Mr O’Doherty says the Yes result will “go down in history as another example of the decency and fairness of the Irish people”.

“However, for us, this sweet victory is tinged with sadness,” he added.

“Northern Ireland is now the only region in western Europe where marriage equality is not a reality.

“This is a shameful injustice which cannot be allowed to continue.”