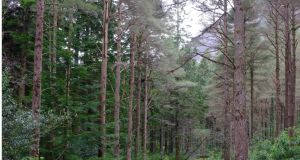 But Taoiseach Enda Kenny said later it was still under consideration. Mr Kenny said the Government “has not made any decision about the decision to sell other than to list a number of opportunities for the sale of State assets”.

Mr Rabbitte had said it was “premature to draw any conclusion” but he believed the “mooted privatisation of Coillte looks more unlikely every day”. He also said he believed he could speak for Minister for Agriculture Simon Coveney in saying the proposed sale was unlikely.

The Minister was speaking during Dáil question time as he discussed the chances of a bio-energy company being established by Coillte and Bord na Móna. Mr Rabbitte said there were “possibilities there”.

He also referred to the weekend protest walk at Avondale in Co Wicklow against any possible sale of harvesting rights.

Harvesting rights
United Left Alliance TD Richard Boyd Barrett, one of the organisers of the protest, said 4,000 people demonstrated at the former home of Charles Stewart Parnell against the plan to sell off the harvesting rights to Ireland’s forestry.

Mr Kenny was being questioned about the World Economic Forum in Davos, Switzerland, and Mr Boyd Barrett said Switzerland, at half the size of Ireland, employed 100,000 people in forestry and “would not dream of selling that resource to anyone”.

Mr Kenny insisted the Government “has not yet made a decision on the sale of State assets, including Coillte”.

He said every weekend thousands of people used the State forests for recreation purposes and when the Government made its decision “is there a serious suggestion that all these amenities will be cast aside”.

Fianna Fáil leader Micheál Martin referred to weekend media reports that the Department of Public Expenditure and Reform was indicating the Government “may have reversed its decision to proceed with the sale of woods owned by Coillte”. He said, “State forestry is one of the most important climate change abatement instruments we have”. The Cork South-Central TD added that a reply to a parliamentary question on the privatisation of State assets “did not mention the sale of forests”.


Sale of state assets
Mr Kenny told him “I would not be too far gone on reports in the newspapers”. The Government had listed a number of opportunities for the sale of State assets including Coillte. “Work is proceeding on the assessment and valuation of this and a number of other assets.”

Mr Boyd Barrett said he had met the troika last week and its members said “there was a commitment to sell off the harvesting rights to Coillte”.

Mr Boyd Barrett called on the Taoiseach to clarify whether the Government was going ahead with the sale or not, and if it was going head “when will it happen and when will the legislation come forward”.

Labour whip Emmet Stagg said it was his understanding that Minister for Public Expenditure Brendan Howlin had said he was “doubtful” the policy to sell harvesting rights could be implemented.

“There are real difficulties in implementing this policy and they are still being examined,” said Mr Stagg.