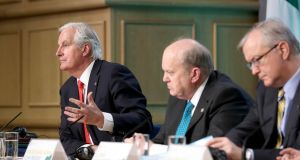 Minister for Finance Michael Noonan said today that the postponement of Ireland’s bailout repayments was but one of several positive developments which will ultimately lead credit rating agency Moody’s to upgrade its assessment of Irish debt.

Moody’s stance on Ireland is crucial for the Coalition campaign to exit the bailout as the company is the only one of the big three leading agencies to maintain a junk rating on Ireland’s bonds.

This rating automatically excludes some main professional lenders from the market for Irish debt as certain investment and pension funds have internal rules under which they are obliged to buy debt only from countries rated favourably by Moody’s and its rivals Standard & Poors and Fitch.

Moody’s has welcomed the deal to extend the maturity of €42.5 billion in loans from the European powers under the Irish bailout, but would not say whether it was ready to upgrade its rating.

In Dublin today, on the second day of talks with his EU counterparts and central bank governors, Mr Noonan said he would not attempt to predict the future actions of any agency.

“We’ve had a whole series of credit-enhancing events in Ireland since January,” the Minister told reporters as he arrived for the talks today.

In addition to longer loan maturities, these included the introduction of the property tax and the deal to scrap the Anglo Irish Bank promissory notes.

“It’s all moving in the same direction and improving Ireland’s credit position, so I am sure that Moody’s will move to reflect that in their ratings as the other principle rating agencies have done previously,” Mr Noonan said.

As the meeting wrapped up at around lunchtime, the Minister was asked about remarks by his German counterpart Wolfgang Schäuble , in which he said stricken banks should be recapitalised first by their home country before any drawdown of capital directly from the ESM fund.

“The country involved must pay for a certain level of capitalisation before ESM capital can come,” Mr Schäuble told reporters in Dublin.

His remarks reflect deep German unease at the notion of the ESM rescuing banks directly, one of Mr Noonan’s key objectives in Europe as he plots Ireland’s exit from the bailout.

Although Mr Noonan has recognised that there will be no deal on that front before Ireland leaves the bailout at the end of this year, he said the Government was still prioritising this portfolio as part of its EU presidency.

“As the details of the resolution policy are discussed, issues arise such as the one that you refer to, which Wolfgang Schäuble talked about, but no decisions have been made on these matters yet,” he said.

“There are proposals being developed and we will participate like everybody else in the discussion but it’s too early yet to say where the proposals will finally end up or what the consequences but we committed to as part of the presidency to driving the banking union forward to a satisfactory conclusion so that the banks and the sovereigns are separated.”