Expenditure on Carlow-Kilkenny poll in May totalled €185,738, says standards body 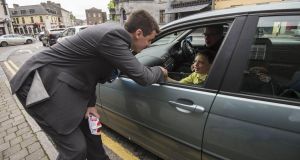 Almost €30,000 was spent by Lucinda Creighton’s Renua Ireland party in its first attempt to have a candidate elected to the Dáil in the Carlow-Kilkenny byelection last May.

Patrick McKee, who was eliminated on the 7th count, spent €29,787 in his bid for election, compared to the €43,895 spent by the successful candidate, Bobby Aylward of Fianna Fáil.

Figures released by the Standards in Public Office Commission (Sipo) on Thursday show that total expenditure disclosed by election agents for the 13 candidates in the campaign amounted to €185,738.

The spending limit per candidate was €45,200 and Mr Aylward recorded the highest spend.

The next highest was €31,594 spent by the Fine Gael candidate David Fitzgerald, who was beaten to the seat on the 9th count by Mr Aylward.

Some € 61,855 will be paid by the Exchequer to eight candidates who qualified for a reimbursement of their election expenses, Sipo said.

The maximum amount which may be reimbursed to a qualified candidate is the lesser of €8,700 or the actual expenses incurred by or on behalf of the candidate.

The donation statements and election expenses statements are available on the commission’s website at sipo.ie and for public inspection at its office at 18 Lower Leeson Street, Dublin 2.

Sipo said it found no evidence that any election agent or national agent overspent at the election.

They byelection, which was held on the same day as the referendum on marriage equality, was triggered by the resignation of Fine Gael TD and former minister Phil Hogan upon his appointment as European Commissioner for Agriculture.

Coronavirus: Managing the surge in cases is a day-to-day battle 16:48
Man (30s) assaulted by group at supermarket in North Co Dublin 16:40
Irish flight bringing PPE from China arrives in Dublin 16:37
Coronavirus: ‘Last time I saw her was when she was put into the ambulance’ 16:34
Coronavirus: ‘We are not here to go and hide in the Garda Station’ 16:06