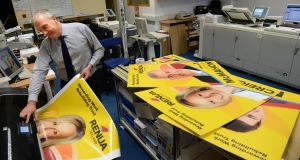 Renua Ireland’s election platform will be based on “rewarding work, rebuilding trust”.

The party, headed by Lucinda Creighton, is the first to reveal its posters ahead of the general election.

Its slogan bears a striking resemblance to the Fine Gael election message of “making work pay” as unveiled by the Taoiseach, Enda Kenny, at a business dinner last week.

A Renua source denied the party had mirrored the Fine Gael strategy. “This is a Renua original. This has nothing to do with Fine Gael. We won’t be changing ours,” said the source.

A number of other parties had theirs prepared in the event of an early election.

Renua has so far fielded 14 candidates for the general election. Three of its candidates – James Charity, Jonathan Irwin and Shane Dunphy – have withdrawn from the race.

The party has been accused of being a repackaging of Fine Gael by other Opposition TDs. Renua has taken some support away from the Government party as evidenced by votes won by its candidate Patrick McKee in the Carlow-Kilkenny byelection.

The party is proposing a new 23 per cent flat rate of income tax for everyone. It also wants the abolition of the TV licence fee and to make RTÉ fund itself entirely from commercial revenue. Motor tax would also be scrapped with an increased levy on fuel instead and the party says that would add three cent to a litre of petrol and four cent to a litre of diesel. Renua also says no public servant should get a pension in excess of €60,000.