Reilly should be removed from office, Martin says 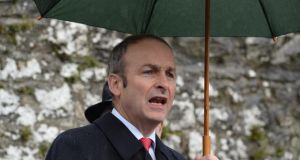 Minister for Health James Reilly should be removed from office because his position is untenable, Fianna Fáil leader Micheal Martin has said.

Speaking to reporters after the party’s annual Wolfe Tone commemoration at Bodenstown cemetery in Co Kildare, Mr Martin said: “I don’t think his position is tenable but equally I would say these have been Government decisions in relation first of all the policy of taking discretionary medical cards from families and children who absolutely need them.”

The former health minister said “James Reilly is clearly not in charge of health and he should be removed from health”.

“We tried it twice and the Taoiseach has refused,” he said of the Opposition motions of no confidence in Dr Reilly, which the Government voted down.

“As long as the Taoiseach continues to support him it seems that James Reilly will have the confidence of the Government.”

Hitting out at the Government’s policy on medical cards he claimed Dr Reilly “keeps denying the reality that such cards are being taken from very needy families”.

He said the presentation of health figures “really suggest we are going to have a terrible year over the next 12 months in terms of the removal of services in health and particularly the removal of medical cards from older people and from people generally across the system”.

Giving the annual oration during torrential rain to about 150 people, Mr Martin said budget cuts and “ill-thought out” policies of Dr Reilly would do “immense damage” to the health system.

The budget was “cynical” and “presented so as to try and cover up what was actually being proposed, he said.

He said Dr Reilly “seems incapable of answering even basic questions on his own deficit and continues to deny that there is any change in the way discretionary medical cards are being given out”.

Fianna Fail would demand “answers and explanation about where exactly these costings come from and who is going to be hit,” he said.

His party would fight against any effort to push through “flawed and dangerous health estimates,” Mr Martin said.

While ministers said the free GP care for under 5s was the “start of universal access to primary care” when the detail came out “ it revealed the largest ever cut in primary care funding in our history”, he said.

He also criticised budget proposals impacting on older people. Mr Martin said the Government has begun an “ assault on the social contract between Irish society and its older people”

“It proposed mean-spirited and callous changes which made only a small impact on the wider budget but will have a major impact on older people,” he said.