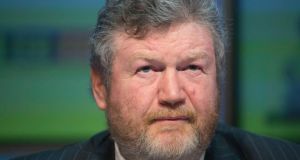 Minister for Health James Reilly has expressed confidence that new draft laws to impose plain packaging on all tobacco products will withstand legal challenges from the tobacco industry.

Amid clear indications that legal moves are in prospect, Dr Reilly said he was “convinced that this measure will work..”

After the Cabinet endorsed the legislation, he predicted huge progress in the drive to prevent tobacco-related illness and death. “This is really a great day for Ireland and for our children and it’s a really bad day for Big Tobacco.”

Although Dr Reilly is under pressure ahead of a Cabinet reshuffle, he dismissed the notion that he was rushing out the legislation to secure a legacy in health in the event that he loses the ministry. “We’ve been working on this for the last couple of years . . . so it’s timely now and we want to get this through as quickly as possible.”

If enacted the Bill will remove all forms of branding from packs, except for the brand and variant name in a uniform typeface.

Health campaigners welcomed the move but tobacco and retail industry interests were quick to warn of legal action. The initiative has already triggered a big lobbying campaign by global tobacco, which has concerns that the Irish law could set a precedent for other European countries.

A spokesman for PJ Carroll said the Australian measures have failed.

“There has been no impact on legal tobacco volumes in Australia, illicit tobacco sales have increased, and the steady decline in tobacco consumption that Australia had experienced in recent years has actually eased, not increased, since the introduction of plain packaging.”

However, Dr Pat Doorley of the Royal College of Physicians of Ireland said the initiative will prevent younger people from taking up smoking. “A study conducted by the Irish Cancer Society and the Irish Heart foundation indicates that teenagers find plain packaging less appealing.”