Taoiseach insists that Ireland has too many politicians for its size 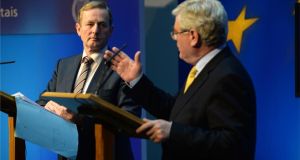 Tánaiste Eamon Gilmore rowed in behind Enda Kenny yesterday as the Taoiseach argued that the Seanad was an outmoded and ineffective institution. Photographer: Dara Mac Dónaill

The Government has fired the opening shots in the referendum campaign to scrap the Seanad, pledging Dáil reforms to strengthen the oversight of new laws if the public votes to abolish the Upper House.

Tánaiste Eamon Gilmore rowed in behind Enda Kenny yesterday as the Taoiseach argued that the Seanad was an outmoded and ineffective institution more suited to the ideas of the 1930s.

“Ireland simply has too many politicians for its size. We must question the very relevance of a second chamber,” Mr Kenny said.

“If the last decade of misrule has proven anything it is that modern Ireland cannot be governed effectively by a political system originally designed for 19th-century Britain. The Seanad did nothing to challenge the unattainable policies of the Celtic Tiger.”

Mr Kenny said abolition would save €100 million per parliamentary term, adding that many small countries had only a single chamber.

Mr Gilmore said a reformed Dáil could serve the public interest. “No democracy is perfect. No institution is perfect. But it must cleave to some fundamental principles: fair elections, where every citizen has an equal say.”

Although the Seanad is the centrepiece of the Government’s political reform campaign, the two leaders pledged a swathe of procedural Dáil reforms to intensify the scrutiny of draft laws by the House and its committees. These include the introduction of a sixth stage of debate and measures to distribute the chairmanship of Dáil committees.

Voters will be asked to retain or scrap the Seanad. The referendum is being tentatively scheduled for Thursday, October 3rd, but Mr Kenny only said that he expected polling day to be in early October. The timing depends on the Government enacting the referendum Bill before the Dáil and Seanad rise for the summer.

Two-week debate
The Bill goes to the Dáil next Thursday for a two-week debate. Of greater sensitivity for the Government is the Seanad debate to follow, likely to continue for three to four weeks.

The proposal is being resisted by Fianna Fáil, which said it would campaign to reform the House. Sinn Féin wants the matter before the constitutional convention.

Former tánaiste Michael McDowell, who is involved with Senators Feargal Quinn and Katherine Zappone in a campaign for Seanad reform, said the referendum was a “smash and grab” for power.