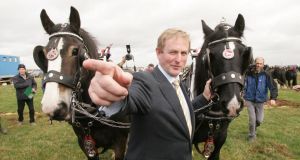 Enda Kenny getting a handle on other farm animals. Photograph: Alan Betson

Two mountain rams brought to a protest demonstration outside Taoiseach Enda Kenny’s constituency office in Castlebar, Co Mayo, got inside the building yesterday.

Mr Kenny was elsewhere in the constituency at about 2.30pm when a small group of protesters from the Farm Family Rights Group arrived with the rams to protest about the Government’s draft proposals on commonage.

Office staff said the animals were deliberately driven through the door of the building in Tucker Street and caused damage by soiling the floor. The protesters said the rams had “accidentally” got into the building.

One picketer, who carried a sign which read “Ramming the Taoiseach”, said, “we came for a peaceful protest bringing two rams, worth about €200 each, with us. But when we got outside the rams shot in the door.”

Gardaí arrived quickly along with a man believed to be an official from the Department of Agriculture.

Donie Shine from Mallow, Co Cork, who is chairman of the Farm Family Rights Group, complained to reporters on Tucker Street that Mr Kenny was more interested in happenings on the Golan Heights and the Ukraine than in the rights of hill farmers.