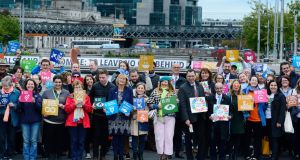 The Coalition 2030 group on O’Connell Street during a rally to mark the third anniversary of the adoption of the UN sustainable development goals. Photograph: Cyril Byrne/THE IRISH TIMES

Ireland continues to be “a profoundly unequal place” and must make greater effort to live up to its commitments on ending poverty and world hunger by adopting the UN sustainable development goals (SDGs) by 2030, a rally in Dublin was told.

Coalition 2030, an alliance of over 100 Irish civil society, environmental organisations and networks, led a street march through the city centre as part of a global day of action on Tuesday, the third anniversary of the adoption of the SDGs.

The attendance of several hundred included members of the public, Government representatives, and ambassadors from Germany, Belgium, Mexico, Finland, Norway, Malta and Spain.

Dr Healy said that to see real progress towards the SDGs robust policy coherence is needed to ensure Ireland’s actions in all areas of government do not exacerbate inequality and exclusion.

“Policymakers must acknowledge that a thriving economy is not a goal in itself, but a means to social development and wellbeing for all. A concerted all-of-government and all-of-society approach is essential to achieve the SDGs and reduce inequality,” he added.

The “Leave No One Behind” promise aimed to ensure the 17 goals could only be considered met if they were achieved for all nations, peoples and segments of society, and that the poorest, most deprived and marginalised were reached first, he said.

Valerie Duffy of the National Youth Council of Ireland said: “Three years in and still we have a job to do to support education and awareness raising about the SDGs and how they can transform the world in which we live – personally, locally, nationally, and globally. Unless we have everyone on board in Ireland, we will not achieve the SDGs in Ireland.”

In New York, Tánaiste Simon Coveney joined the annual global Central Park concert to mark the anniversary and will also speak at the 2018 Global Citizen Festival thee on Saturday.