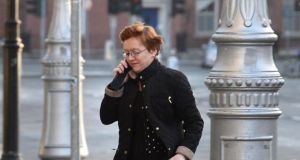 It began with a text message. On November 8th, 2013, Kenneth Ruane, the head of legal affairs for An Garda Síochána, contacted Ruth FitzGerald, who was advisory counsel at the office of the Attorney General, to ask for a meeting.

“An issue has arisen in respect of Data Protection for An Garda Síochána regarding recording of telephone calls both in and out of certain Garda stations,” he wrote.

The meeting took place a few days later, on November 11th. There, Garda commissioner Martin Callinan gave FitzGerald an outline of a recording system he said had come to light as a result of the discovery process in the civil action taken by Englishman Ian Bailey.

FitzGerald listened, took notes and said the commissioner should inform the minister for justice. She and other officials in the Attorney General’s office were to say the same thing on a number of subsequent occasions.

FitzGerald took the information and sent a memo to the Attorney General, Máire Whelan, asking her to nominate a barrister to advise on the situation. Whelan responded by nominating a barrister but did not comment further.

She would later tell the commission her initial impression on reading the early memo was that the state of knowledge at that point was “entirely tentative” and the only information forthcoming seemed to be of “an historical situation”.

On November 19th, Whelan attended an internal AG’s office meeting at which the issue was discussed, although not in great detail.

According to the Fennelly report, on two occasions in November 2013 the Garda commissioner was made aware that the AG’s office believed the Department of Justice should be informed of the general recording issue. The AG’s officials assumed that this would be done by the Garda.

However, in its analysis of Whelan’s handling of the case, the Fennelly report focuses on why the AG herself didn’t inform the Minister.

If she intervened and dealt with the commissioner, she believed that she would be “undermining the minister”, adding that “the Garda Síochána are part of the Department of Justice and Equality”.

The attorney added another reason for not contacting the minister, according to the report. She thought that part of the issue involved Alan Shatter himself. He was “part of the narrative . . . there were issues, allegations touching the minister himself personally”.

Here she was referring to the controversy concerning remarks made by Shatter about the Garda whistleblowers. In any event, the AG said, she considered the matter to be a “whole of government issue” and thought it warranted “being raised and managed by the Taoiseach”.

The Fennelly commission zones in on Whelan’s failure to contact Shatter or Callinan directly. Although she considered, by spring 2014, that she had discovered a matter of the gravest possible public concern, “no contact was made with nor inquiry made of either of the two people most obviously concerned and responsible,” the report states.

This had the “unfortunate result” that the relevant actors went into the events of March 23rd and 24th – days that in effect sealed the fates of Callinan and Shatter – in “almost complete ignorance of many relevant facts”.

In a later written submission, she regretted her earlier use of what she described as “trenchant language”, insisting she had not expressed an unequivocal view that “any particular person or body might be guilty of an offence” but that she had referred only to “potential” illegality.

The commission accepted the Attorney General’s qualification, but said it could not ignore the “very strong terms” in which she initially described her account to Kenny.

It concluded that she made a “very dramatic” presentation of what she saw as a serious state of affairs. “She presented a picture of widespread and longstanding unlawful behaviour in An Garda Síochána.”

And yet, serious as it was, and despite the relative lack of information at their disposal, no attempt was made by the Attorney General or the Taoiseach to obtain further information in “the most obvious way, namely by asking the Garda commissioner, if necessary via the Minister”.