Q&A: What does commission statement on water charges mean? 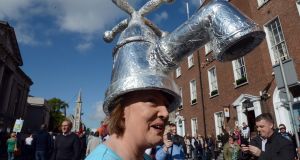 Q: What does the European Commission’s response on water charges mean?

A: In short, the Commission is insisting that Ireland must charge for water. It does not specify how or in what way but it is clear on the need to enforce the “polluter pays” framework.

The response says any flexibility offered to Ireland expired in 2010 when the then Fianna Fáil and Green coalition committed to the introduction of water charges. It is therefore the Commission’s view that water charges are the established practice in Ireland and must remain.

Q: Is this a surprise?

A: There was a lot of confusion about the Commission’s position with regard to water charges. This reponse is their clearest indication yet.

Q: Why is this response important?

A: The European Commission is clear that reversing of water charges would breach the EU Water Framework Directive. If the Commission rules against Ireland then enforcement proceedings will be issued and daily fines could follow.

Q:What fines could the country face?

A: A: That is an unknown quantity. It is not certain the country will face fines but if the Commission moves to impose levies, they could run to millions of euro.

In December 2012 Ireland was fined €12,000 every day for failing to comply with a waste water directive.

Q: So happens next?

A: This is where it gets tricky. In the agreement reached between Fianna Fáil and Fine Gael water charges are to be suspended for nine months. An independent commission will then be established to examine the best charging regime.

However the findings will then be sent to an Oireachtas committee which will then vote on the future of the levies. Most political parties believed this would lead to the abolishment of the charges in the long run. The Commission’s response indicates that a charging regime must be retained.

Q: Will this hamper the work of the independent commission?

A: No. The commission was asked to identify the best charging regime. The European’s Commission response will not alter or change their terms of reference.

The difficulty will be for the politicians who will have to vote on the commission’s recommendations when it reports.

Q: Who is this an issue for?

A: Almost everybody really. Politically this is a problem particuarly for the Government and indeed Fianna Fáil.

The party says it has legal advice that insists water charges cannot be abolished. However it has not, and refuses to, publish that advice.

Sinn Féin, the Anti-Austerity Alliance and People Before Profit alliance have insisted that the charges can be abolished and have strongly refuted the Commission’s position on water charges.

It is, of course, a difficulty for the Government which at some point in the future will be left with the option of either abolishing the charges and facing daily fines or retaining the charges and ignoring the democractic will of the Dáil.