Q&A how to vote: No selfies, and leave the badge at home

Know where to go, what the ballot looks like, and don’t risk a fine or spoiling your vote 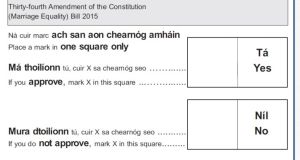 The part of the same-sex marriage referendum ballot paper where voters will mark either Yes or No. The full wording of the amendment is also published on the ballot paper.

I have registered to vote for the first time – does that mean I don’t have to go to the polling station?

Not as strange a question as it seems. With almost 66,000 voters added to the electoral register ahead of the referendum, many people will be voting for the first time on Friday. Some TDs have encountered younger voters who believe that by merely registering they have already voted. Not so – you must go to your polling station to cast your ballot.

Similarly, some campaigners have met younger people who believe they can vote but did not register in time. If you have not registered you cannot vote.

What will I need to bring with me when I go to vote?

You should have received a polling card but you do not necessarily need it to vote. Alternatively, you can bring a valid form of personal identification such as a driving licence or passport.

Can I vote anywhere I want?

What time can I vote at?

Will the same paper be used for both referendums? How will I know which one is which?

The presidential candidacy referendum is the proposed 35th amendment to the Constitution. The ballot paper will ask if you approve of the proposal to amend the Constitution in line with the “Thirty Fifth Amendment of the Constitution (Age of Eligibility for Election to the Office of President) Bill 2015”. This will be on a green ballot paper. Vote Yes or No for each as you wish by placing an X in the corresponding box. It is important not to mark your ballot paper in any other way, which could spoil your vote.

Some people say we can’t take selfies at polling stations. Is that true?

Yes, it is true. All voting is done by way of secret ballot and the Department of the Environment says “taking photographs and the sharing of any photograph of a ballot paper marked at an election or a referendum could have the potential to compromise the integrity and secrecy of a ballot and may constitute an offence”.

Not only could you void your own vote, you could face a significant fine.

If you want to take pictures of you exercising your democratic right you should do so outside the polling station before or after you have voted.

What about wearing badges to the polling station? Is that allowed? This is not as clear cut but officials at the polling station may ask you to remove any badges or political memorabilia before you cast your ballot. These rules are there to prevent campaigning at polling stations and also mean you cannot canvass people as they go to vote.

When will I find out the result?

Counting will begin on Saturday morning, and early indications should be available by mid-morning. A final result is expected on Saturday evening.