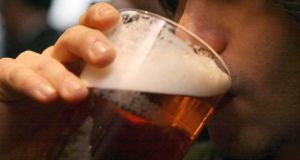 Publication of legislation to introduce minimum pricing for alcohol and regulate advertising has been delayed until the autumn, creating doubts about its planned passage by the end of the year.

Minister for Health Leo Varadkar had pledged in April to publish the Public Health (Alcohol) Bill before the Dáil adjourned for the summer recess.

But earlier in July in the Dáil during health question time, he indicated there would be a delay.

In a statement on Thursday the Department of Health said that “due to the breadth and complexity of the measures, drafting continues over the summer”.

The Bill is expected to be ready in the autumn “when it will be initiated in the Houses of the Oireachtas”.

The department stressed the Bill “is a top priority for the Minister” and a spokesman reiterated this adding that “it’s not being derailed in any sense”. Asked if it meant the Bill would not be passed by the end of the year or before a general election he said “not necessarily”.

Liver specialist and President of the Royal College of Physicians of Ireland Prof Frank Murray has expressed disappointment at the delay.

He said: “This is a David and Goliath battle involving the huge financial resources of the alcohol industry which is protecting its profits.”

Prof Murray said the college would “continue to strongly support the Minister for Health in this battle to bring in the setting of a minimum unit pricing of alcohol, which has been proven to immediately save lives and reduce the harm caused across society”.

He warned that “every day the Bill is delayed means that the harm being caused to men, women and children as a result of unsafe use of alcohol continues”.

But he said the Bill could be a “powerful legacy for the Minister and the Government” by saving lives and it “can change our harmful relationship with alcohol”.

His comments follow growing concern about the level of women’s drinking now being on a par with men’s.

The department highlighted the complexities involved in the Bill’s provisions. As well as minimum unit pricing, it will include health labelling on alcohol products as well as restricting advertising, regulating sports sponsorship and sponsorship aimed at young people, restrictions on certain promotional activities and a broadcast watershed.

The Minister pointed out in April when he promised the legislation, that it had been “bandied about” for the last three or four years without agreement. They were in year four of this Dáil and he wanted “to get the good stuff done”.

As part of Ireland’s European obligations the Bill will be notified to the EU, after publication, for its observations.