Doctors would have had to record pregnant woman’s age, ethnicity and marital status 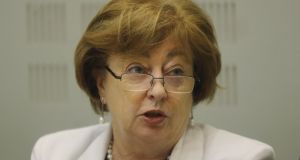 Social Democrats co-leader Catherine Murphy: “This is not about public health policy. This is about making women feel guilty and ashamed and that is not part of good health policy.” Photograph: Lorraine O’Sullivan/The Irish Times

Pro-choice TDs have hit out at proposed changes to abortion legislation which would have required a doctor to report on a woman’s ethnicity and marital status.

The proposed amendments were labelled as “archaic” and “objectionable” during a Dáil debate on Tuesday night.

A number of anti-abortion TDs proposed the changes, which would have required medical practitioners to record whether a woman had any previous abortions, ectopic pregnancies or stillbirths. If a medical practitioner did not do this, they could have been fined or jailed for up to five years.

The two new amendments, tabled by TDs including Carol Nolan, Peadar Tóibín and Mattie McGrath, sought to make a medical practitioner keep a record of certain information including the age, marital status, ethnicity, gravidity and parity of the pregnant woman.

The medical practitioner would also have to provide information on the number of any previous pregnancies resulting in live births, stillbirths over 24 weeks, spontaneous miscarriages, ectopic pregnancies and previous abortions.

Mr Tóibín said the information would be used for policy reasons. “I have always believed that information is key. Information is no burden and no threat to anyone. Some people will say the type of information we are seeking to collect will be used in particular ways in an effort to stigmatise or create difficulties for people to seek to access abortion,” he said.

However, he said the information would be used for “research, policy development and for people to understand what is happening in the system”.

“Are we really going to look for the ethnicity of the people who are going to be receiving the services that this country democratically has decided should be available to women? Is that a code word for asking are these people of colour, or are these people ethnically Irish?

“It is this kind of language that strikes me as being from the school of the Deep South in the US where there is a very active attempt in different states to frustrate any woman in her own state or crossing the state line in availing of services in relation to pregnancy.

“Do not attempt to use this Bill as a mechanism to shame women and shame and frighten doctors.”

The co-leader of the Social Democrats Catherine Murphy said the proposed amendment would amount to an “inquisition”.

“I find this very difficult to take on board. This looks like an attempt to re-run the referendum. This is not about public health policy. This is about making women feel guilty and ashamed and that is not part of good health policy, and I just find this objectionable and I think it has been tabled for all the wrong reasons.”

Sinn Féin TD Jonathan O’Brien said the provisions would further traumatise rape victims. “Imagine being a rape victim and if that was not traumatic enough you would have to answer questions about previous births, previous terminations, ectopic pregnancies, your marital status. I just think it is archaic, it is racist and I just wish that we wouldn’t even have to debate this.”

He said it was a “poor reflection that people in this chamber would expect doctors to ask rape victims these questions, and if they didn’t, then jail the doctors”.

“It is more about shame and surveillance of women. Is this some sort of policing of promiscuity, is it the policing of pregnancy? Because it harks back to the past. You should be ashamed in front of the women in your lives.”

The amendments were defeated by 89 votes to 8.