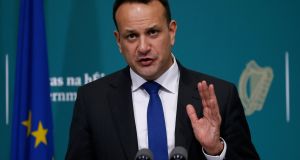 Fine Gael will not enter government “at all costs” and must see fiscal responsibility at the centre of any deal, Taoiseach Leo Varadkar has told his TDs.

A meeting of the Fine Gael parliamentary party, held remotely, also heard Mr Varadkar raise the prospect of cross-party efforts to appoint senators to pass legislation if government-formation talks had not concluded.

Sections of emergency anti-terrorist and anti-crime gang legislation are set to lapse if a new government is not formed by the end of June because the Seanad is not in session.

The provisions of the Offences against the State Act and the Criminal Justice Amendment Act 2009 are renewed each year by the end of June through a motion of both the Dáil and the Seanad.

If the laws are not renewed by June 30th, then non-jury trials for certain offences will not be allowed. These include offences relating both to paramilitary and gang crimes, such as directing the activities of a criminal organisation or training in firearms.

A number of provisions on evidence will also lapse including the extra powers given to gardaí to allow them to make inferences from an accused person’s silence.

The measures will not be renewed because the Seanad is in abeyance until a new government is formed. Only 49 members of the 60-seat Seanad have been elected. The remaining 11 are chosen by the incoming taoiseach. Mr Varadkar is not empowered to nominate them.

Senator Sean Kyne asked Mr Varadkar about this, and said it would be a shame if this was allowed lapse under Fine Gael.

Mr Varadkar is understood to have responded that efforts would still be made to ensure that did not happen, such seeking “cross-party” approval to appoint 11 senators, even if such efforts are unsuccessful.

Other parties immediately poured cold water on the idea, with one well-placed source arguing that a taoiseach has to be elected by the Dáil first.

Both Mr Varadkar and Tánaiste Simon Coveney said that any programme for government must reflect Fine Gael values, citing fiscal responsibility and the deficit.

The Taoiseach suggested that if the deficit is not tackled – with Fine Gael and Fianna Fáil favouring plans to reduce the deficit in the latter half of a five-year term – this would send out a signal to the markets that Ireland is not serious, as would the postponement of the increase in the State pension age, another sticking point in the talks.

Mr Varadkar is said to have told his TDs: “It won’t be government at all costs.”