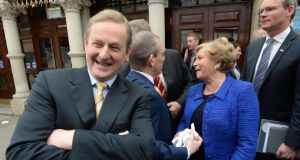 Fine Gael has made the most gains in the latest poll, with 28 per cent support. Photograph: Dara Mac Dónaill

Fine Gael are back on top, according to the latest Irish Times/Ipsos MRBI poll.

When undecided voters are excluded, the party is on 28 per cent support (up four points since March), opening up a gap with Sinn Féin on 21 per cent (down three points) and is ahead of the combined vote for Independents/Others on 24 per cent (down four points).

Labour is unchanged on 7 per cent, while Fianna Fáil on 20 per cent (up three points) has recovered some of the ground it lost in recent polls.

Satisfaction with the Government is up to 30 per cent, an increase of five points.

What is most interesting about today’s poll is that both parties on the right, Fine Gael and Fianna Fáil, have made gains at the same time, indicating perhaps a shift in priorities away from protesting austerity and towards protecting the economy.

Interviewing took place last Wednesday and Thursday, with the Government’s spring statement still ringing in our ears and the referendum campaign distracting both journalists and voters.

Both these groups backed Fine Gael in 2011, only to lose faith somewhat in recent years, so regaining their confidence is a very positive indicator for Fine Gael.

Satisfaction with Enda Kenny’s leadership is up three points to 31 per cent, on a par with Labour leader Joan Burton (unchanged).

On 7 per cent, Labour appears to be anchored in the single digits. The party has languished between 6 per cent and 9 per cent since our June 2013 poll. As yet, there has been no reward from voters for its role in restoring the public finances. Voters do not see Government as a team sport, confirmed by the Liberal Democrats’ drubbing in the recent UK election.

Parties and candidates on the left have given up the gains made since this time last year. At the height of the anti-water demonstrations, Sinn Féin and Independents/Others together attracted support from more than half of voters. In this latest poll, they account for 45 per cent of the vote.

Sinn Féin is three points lower on 21 per cent, although still at twice the level of support the party achieved in the 2011 general election. Satisfaction with Gerry Adams as leader of Sinn Féin is up three points to 31 per cent, unusually moving in the opposite direction to party support but explained perhaps by the lifting of a cloud of negative media coverage that has hung over the Sinn Féin leader.

The entry of Renua into the fray has not, on the face of it, inflated the independent vote. As the economy recovers, does our appetite for reform diminish?

Fianna Fáil has bounced back from a low of 17 per cent in March to 20 per cent in this poll. Key to Fianna Fáil’s success will be carving out a point of difference from Fine Gael, who could hoover up the floating right-wing vote if the economy continues to improve.

Micheál Martin has also seen his satisfaction rating jump to 29 per cent (up five points), broadly in line with the ratings achieved by other leaders.

The numbers, polling and economic, are going in the right direction for Fine Gael. The longer the Government waits to seek a fresh mandate, the more time voters will have to feel a real improvement in their personal finances, but it also opens the door to adverse international events changing the budgetary arithmetic or to crises exploding closer to home.