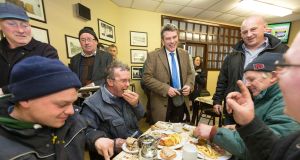 A new poll for the Clare constituency has Government TDs losing two of their three seats.

In a shake up of the four-seat constituency, the Clare Champion poll has Noeleen Moran of Sinn Féin taking one of the seats, with “No Doctor, No Village” candidate Dr Michael Harty also taking a seat.

The poll is forecasting Fine Gael TD Joe Carey and Labour TD Michael McNamara TD will lose out, but that Pat Breen (Fine Gael) and Timmy Dooley (Fianna Fáil) will retain their seats.

The poll had a sample of 660 electors and was carried out for the Clare Champion by the marketing department of the Limerick Institute of Technology (LIT). The poll sample was collected at 14 sample points across the Clare constituency last weekend.

The poll has Dr Harty winning 12 per cent of first preferences, and he said the poll is “very encouraging, but we are not in any way complacent”.

Dr Harty said his campaign has around 25 Clare GPs knocking on doors “almost every night” across the county. He said: “What we are saying about the need for a rural revolution is hitting a chord.”

The poll has sitting Fine Gael TD Joe Carey is in sixth place with 6.13 per cent of the vote. The Clarecastle man dismissed the poll as “unreliable”.