Analysis: Some parties act to avoid dissent caused by Protection of Life During Pregnancy Bill of 2013

Anne Ferris TD said she had to support Clare Daly’s Bill to allow for abortion in cases of fatal foetal abnormality. The bill was defeated in the Dail by 104 votes to 20. 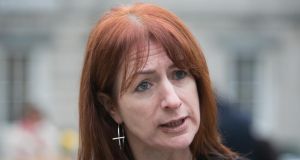 TDs who have strong views on abortion were put on the spot on Tuesday when Independent TD Clare Daly won the right to a debate on her private member’s Bill on fatal foetal abnormalities. Photograph: Gareth Chaney/Collins

Party politics, individual conscience and perceived political advantage all played a part in the positions adopted by TDs in Tuesday’s Dáil vote on a Bill providing for abortion in the cases of fatal foetal abnormalities.

The two Coalition parties applied the whip for the vote on the basis that the Attorney General had advised the legislation was unconstitutional, and consequently the Bill could not be passed.

Fine Gael TDs were happy to follow the whip, even though some of them would like to see the Constitution changed to allow for abortion in the cases of fatal foetal abnormalities.

The party was riven with dissent by the Protection of Life During Pregnancy Bill, which was passed in the summer of 2013.

That legislation provided a legal basis for abortion in cases where a mother’s life is in danger, including from the risk of suicide.

It resulted in a divisive internal debate in Fine Gael, and the ultimate departure of Lucinda Creighton and three other TDs and two senators from the party.

Having insisted on the whip to ensure that legislation passed, Taoiseach Enda Kenny was adamant the Coalition would not return to the issue during its term of office.

Party TDs who have strong views on the issue were again put on the spot when Independent TD Clare Daly won the right to a debate on her private member’s Bill on fatal foetal abnormalities.

Wicklow TD Anne Ferris decided she could no longer go against her strongly held belief in favour of liberalising the abortion law and instead supported the legislation.

While nobody doubted Ms Ferris’s sincerity on the issue, there was some puzzlement in the Labour Party at the fact she decided to defy the whip on this occasion, when she had voted with her party against a similar proposal in the past.

One explanation given by colleagues is that Ms Ferris had toed the party line out of loyalty to her old Democratic Left colleague Eamon Gilmore but, given the way he was forced from office, did not feel bound to suppress her opinions any longer.

A number of other Labour TDs would have liked to vote the same way but party loyalty allied to the basic fact the legislation was deemed unconstitutional persuaded them to stay in line.

Fianna Fáil decided to allow a free vote on the issue, but that had as much to do with political considerations as with principle. The fact is the party is hopelessly split on abortion - as the 2013 Bill demonstrated.

At that time, only a minority supported the line taken by party leader Micheál Martin.

This time, Mr Martin voted with the majority holding to a more conservative position, with three of the party TDs backing the Daly Bill.

Allowing a free vote was the sensible option to avoid another split.

Sinn Féin also took a political approach to the vote, with the party abstaining.

The ostensible reason for this was that the party had not decided its position through its internal mechanisms, but the abstention ensured Meath TD Peadar Tobin, who voted against the party line on the 2013 legislation, was not forced to adopt a similar position.

Clare Daly and the left-wing TDs who supported her in the Dáil have strong views on the need to liberalise the abortion law, but the political implications of putting Labour TDs on the spot was not lost on them.

A referendum on abortion is not going to happen before the next election.

At that stage the voters will have an opportunity to vote for parties and individuals committed to liberalising the abortion law or those committed to maintaining the status quo.

While the Bill was defeated by 104 votes to 20 in the Dáil on Wednesay, abortion is not going to go away as a divisive political issue.