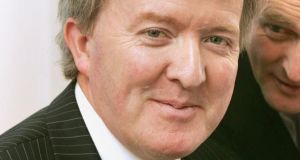 Political pressure has intensified on Minister of State John Perry after court documents suggested he received loans from Bank of Ireland to pay off tax arrears.

Amid Government support for Mr Perry, the development comes after Danske Bank secured judgment for €2.47 million against him and his wife Marie.

Commercial Court exhibits include minutes of a January 2012 meeting with Danske in which Mr Perry said Bank of Ireland agreed a 10-year loan for tax arrears of some €100,000.

The Opposition wants an explanation from Mr Perry, but his department declined to discuss the affair.

“The reference to tax arrears on the part of Minister Perry in the minutes of the meeting is highly significant and raises an issue that the Minister must immediately clarify,” said Fianna Fáil finance spokesman Michael McGrath.

Sinn Féin said: “If it transpires that any of his businesses, small or otherwise, are in arrears, then his position is becoming increasingly untenable.”

There was no immediate response from Taoiseach Enda Kenny, who earlier said he had spoken on Sunday with Mr Perry.

“He’s got a court judgment to deal with now in respect of the next five or six weeks and obviously that’s a matter for him to work out with his people and his personnel,” Mr Kenny told Mid-West radio.

A spokesman said that Tánaiste Eamon Gilmore had no wish to comment “on the details of Mr Perry’s financial circumstances”.