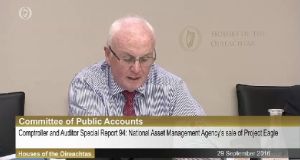 The National Asset Management Agency has said it forced a bidder to withdraw from the sale of its Northern Ireland property loan book when it learned of proposed fixer fees.

Nama chairman Frank Daly told the Public Accounts Committee the agency would not let Pimco continue in the process when it learned of a fee-sharing arrangement.

The Comptroller and Auditor General has said Pimco made the decision to withdraw from the process when it became aware people stood to benefit financially from the sale.

Mr Daly insisted they exited the process because Nama had made it clear they “wanted them out”.

Project Eagle was the name given to more than 900 loans secured on properties in Northern Ireland, the UK and Republic, that Nama sold in April 2014 to US firm Cerberus for £1.3 billion (€1.5bn).

It is alleged that Frank Cushnahan, a Nama Northern Ireland Advisory Committee (NIAC) member; Belfast law firm Brown Rudnick; and the managing partner of Tughans solicitors Ian Coulter were to receive fixer fees if Project Eagle was sold to Pimco.

Mr Daly confirmed he became aware in March 2014 about the proposed fee-sharing arrangement.

He said he was shocked and appalled to learn of the allegations. Mr Cushnahan’s legal representatives have strongly refuted the claims he sought to benefit from the sale.

Mr Daly confirmed the agency considered writing to Mr Cushnahan when they became aware of the claims but decided against it.

He said there was no obligation to make contact and the agency sought a legal viewpoint to confirm that.

Asked if that decision would change in hindsight Mr Daly said he could not answer hypothetical questions.

Mr Daly insisted there was no evidence that staff at Nama made personal gains from the sale of Project Eagle.

The chairman said there may be questions to be answered about the sale but insisted there were not questions for the agency.

Mr Daly insisted the agency yielded the best possible result for the taxpayer and he would not change the manner in which the assets were sold.

The chairman said: “Was there wrongdoing there? Let’s leave that to the National Crime Agency [who is investigating the sale].

“Was there wrongdoing by Nama? Absolutely not.”

The CA&G report found the sale resulted in a loss of €220 million to the Irish taxpayer.

Nama continued its criticism of the findings and the office of the CA&G when giving evidence to the Pac on Thursday.

Mr Daly said it had no problem with oversight and it did not make a decision overnight to challenge the report.

He said the CA&G did not have the expertise to carry out the report and Nama does not accept its findings.

Dublin Rathdown TD Josepha Madigan said that the C&AG report had a lot of “nos”.

“No records of discussions around the sale of Project Eagle, no clear valuation method, no formal expert advice received, no contact with Mr Cushnahan of the fee agreement, a lack of openness in relation to the bidding process, no conflict of interest evaluation.

Ms Madigan said that her reading of the C&AG report was that the Project Eagle sale was “at best sloppy and unprofessional and at worst rushed and opportune”.

The agency was also asked about Nama making contact with Pac members before the hearing.

Mr Daly insisted that was to discuss logistics and was aiming to be helpful rather than obstructive.

He said Nama is often criticised for not engaging with members of the Oireachtas and insisted the agency “cannot win”.

Labour Party TD Alan Kelly said it was “selective briefing” to certain members of the committee.