Peter Sutherland: EU must do more to save migrant lives

Only nine naval vessels and two aircraft on duty in Mediterranean, says ex-commissioner 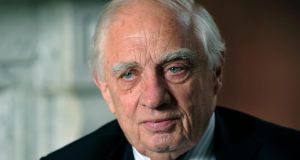 The majority of EU states have failed to respond adequately to migration, which is one of the most urgent humanitarian challenges of our time, according to former EU commissioner Peter Sutherland.

He said that Ireland, as a country with more experience than most of the traumatic issue of migration, should try to play a positive role in shaping EU policy on the subject.

Mr Sutherland, who is the special representative of the UN secretary general on migration, made the comments during the inaugural Barrett Family lecture at the Nanovic Institute for European Studies in Dublin.

He said solidarity was a fundamental principle of the EU but it was not being demonstrated in the response to the refugee crisis with 3,419 asylum seekers known to have drowned in the Mediterranean last year.

“Every day more drown. Some months ago, the pope in Lampedusa expressed his moral outrage at the continuing state of affairs. But still today there are only nine naval vessels and two aircraft from the whole of Europe dedicated to the task of saving lives in this vast expanse of water. One of the ships is from Iceland.”

“Over the past three years Germany and Sweden have taken two-thirds of all Syrian refugees.

“The United Kingdom resettled just 90 Syrians. The Lebanon has taken 1.6 million and this with a total population of only about six million.

“So there seems to be a deliberate policy in some member states of the European Union to leave the frontline states to handle the problems both in saving lives and in resettlement.

“This is not fair and will not, and does not, work.”

Mr Sutherland said the Italians had tried to dedicate their navy to saving lives but received virtually no assistance. Other countries preferred to respond by blocking points of border-crossing rather than combining to devise responses such as the processing of asylum requests in transit countries and burden-sharing in Europe itself.

He said the European Commission was preparing a European agenda on migration but he expressed the fear that there was little indication among member states of a general willingness to develop joint responses or to demonstrate solidarity with the frontline states.

He pointed out that an estimated 25,000 refugees had drowned in the Mediterranean since 2000. Many of them were fleeing from conflicts in Syria, Eritrea, Libya and Afghanistan.

“Under the 1951 convention adopted by each of the member states of the union, asylum is an obligation to be provided for those who are persecuted.

“But is this obligation to be carried solely by the first country in the EU that refugees reach? Today the European Union hosts one million recognised refugees.

“But in 2014, 90 per cent of the 600,000 or so applications made in the EU were placed in only 10 member states. Ireland has 1,450, UK 31,945, Germany 202,815 and Sweden 81,325. These differences reflect much more than the different aspirations as to ultimate destination by the migrants themselves. They reflect different attitudes by receiving governments and their sense of obligation collectively.”

Mr Sutherland said the EU had to create more effective common policies on a range of issues.