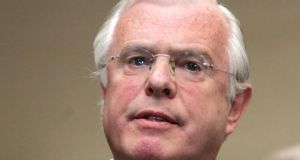 Peter Matthews: Fine Gael reneging on a commitment it gave last October to respect the right of conscientious objection

Fine Gael TD Peter Mathews has claimed his party is reneging on a commitment it gave last October to respect the right of conscientious objection.

Mr Mathews is one of three Fine Gael parliamentarians who has publicly stated they will oppose abortion legislation when it comes before the Oireachtas later this week.

The Dublin South deputy yesterday pointed to article 115 of the party document of the European People’s Party (EPP), the EU-wide political movement of which Fine Gael is a member. Signed in Romania last October the article states: “We consider it is necessary to respect the right of conscientious objection.”

Free vote request
It is one of three motions he will present to the Fine Gael weekly parliamentary party meeting today requesting a free vote for those opposed on moral grounds to the Protection of Life During Pregnancy Bill. Taoiseach and party leader Enda Kenny has said a strict whip will be imposed on parliamentarians, with those defying the whip being expelled. Two Galway West politicians, Brian Walsh TD, and Senator Fidelma Healy-Eames have said they will oppose the legislation.

Mr Mathews disclosed his intention at a briefing session in Leinster House yesterday organised by his Fine Gael colleague Terence Flanagan, who also has major difficulties with the Bill.

Ethics and morals
Mr Flanagan invited Dr Donal Ó Mathúna, a senior lecturer on ethics at Dublin City University, and Dr John Murray, lecturer in moral theology in the Mater Dei Institute and chairman of the Iona Institute to brief TDs and Senators on the issue of conscientious objection. Those who attended included a number who will support the legislation.

Dr O Mathúna said the inclusion of a personal right to object for reasons of conscience was welcome but criticised the absence of a similar right for institutions. Dr Murray said conscience went to the heart of who people were and conscientious people thought for themselves.