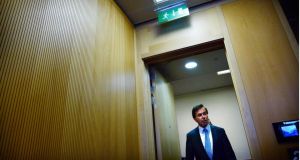 “The longer [Minister for Justice Alan] Shatter remains in the headlines the more the Opposition parties scent blood and the more determined they will to keep him there in the hope of delivering the kind of blow that will finish his career.” Photograph: Bryan O’Brien

The problem facing Minister for Justice Alan Shatter is that the controversy he brought down on his own head two weeks ago will simply not go away.

While nothing in the welter of claim and counterclaim that has dominated the headlines in the intervening period appears significant enough to cost Shatter his job, the persistence of the controversy threatens to undermine his position.

Alastair Campbell, who served as Tony Blair’s influential adviser, famously remarked that if a negative story about a politician remained in the headlines for 10 or 12 days it represented a serious challenge of crisis management.

The longer Shatter remains in the headlines the more the Opposition parties scent blood and the more determined they will be to keep him there in the hope of delivering the kind of blow that will finish his career.

The other side of the equation is that as long as the two Coalition parties remain firmly behind Shatter he has nothing to fear – because Fine Gael and Labour have the Dáil numbers to keep his pursuers at bay. Taoiseach Enda Kenny yesterday repeated his support for his embattled Minister and there appears little doubt that, when it comes to a vote tonight, Shatter will survive in office by a comfortable margin.

Dáil hothouse
Outside the hothouse atmosphere of Leinster House, there a question about how focused the voters really are on a piece of political theatre that is remote from their everyday concerns.

Independent TD Michael Lowry sought to reflect that view yesterday when he said: “The public are sick and tired of this ongoing farce and the media circus surrounding this issue. Now is not the time for opportunistic politics nor is it the time to waste Dáil hours on a motion of no confidence and Minister Alan Shatter’s encounter with gardaí at a checkpoint.”

Whatever the public thinks, however, Shatter has a political problem. The issue at the core of the debate was summed up by Fianna Fáil justice spokesman Niall Collins in the Dáil yesterday afternoon when he questioned the Taoiseach about the Minister’s “inappropriate use of private information” to launch a political attack on Independent TD Mick Wallace two weeks ago.

Shatter was subsequently mired in trying to explain an incident in which he failed to give a proper breathalyser sample to gardaí at a routine checkpoint but his real problem is the fact he used confidential information given to him by Garda Commissioner Martin Callinan to attack Wallace.

Sinn Féin leader Gerry Adams got to the heart of the matter in the Dáil yesterday when he pointed out there had been a long list of ministers for justice including Seán Doherty, Willie O’Dea and Michael McDowell who had obtained information from the Garda which they had then used for political purposes.

It is ironic that Shatter, who has been a truly reforming Minister in many respects, should have got himself into the same kind of trouble as so many of his predecessors. One reform that is long overdue is the creation of a new relationship between the Minister and the Garda.

Apart from the inappropriateness of Shatter’s use of confidential information from the Garda Commissioner, he has to deal with the claim he behaved improperly in not completing a random breathalyser test in 2008 or 2009.

Shatter has insisted he behaved properly and no report was made by the gardaí involved in the incident.

The facts appear to back him up and the Garda Commissioner has informed the secretary general of the Department of Justice that a search of the Garda computer system has failed to locate any such report.

Dismissive and brash
One of Shatter’s characteristics as a politician is that he has eschewed the “hail fellow well met” approach of most TDs. Lowry alluded to that yesterday: “I do not consider Alan Shatter a political friend. He was never the most popular member of the House. He can be irritatingly dismissive and brash.”

The other side of that coin is that Shatter treats everybody, friend and foe, alike. He doesn’t schmooze colleagues and he doesn’t leak to the media. While he may not be on warm terms with many colleagues, most have great respect for his abilities. That is why he will survive unless further disclosures emerge to undermine his position.