Greens want Minister to step aside temporarily until after judgment registered 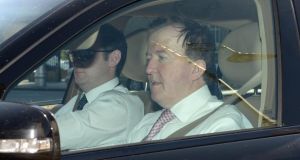 Fianna Fáil has called on John Perry to clarify if he used his political position as Minister of State as leverage when dealing with banks over his personal financial difficulties.

Minister of State John Perry is facing growing political pressure to consider his position following the judgement obtained by Danske Bank in the Commercial Court against him for an outstanding €2.47 million.

Fianna Fáil finance spokesman Michael McGrath today called on the Sligo TD to clarify if he used his political position as Minister of State for Small Business as leverage when dealing with AIB and Bank of Ireland in terms of his personal financial difficulties.

Speaking to reporters today, Mr McGrath said in the evidence that was given yesterday to the Commercial Court there appeared to be a complete failure by Mr Perry to co-operate with the bank over the sums that were owed.

Mr McGrath said there was evidence that Mr Perry in April said during a meeting that he knew “he would be meeting with AIB and that he knew [the head of Bank of Ireland] Richie Boucher personally.

“And this came at the same time when he in his capacity as Minister for State was writing to the head of AIB and the head of Bank of Ireland asking them to meet the Forum on Small Business [to explain their policies and positions on distressed loans to small businesses].

“There is certainly a concern there in relation to the crossover of his personal banking difficulties and his interaction with the banks as Minister for State.

Mr McGrath stopped short of asking him to step aside but stressed that there seemed to be a conflict of interest and there was a need for clarification.

Green Party leader Eamon Ryan also focused in on the evidence in which Mr Perry referred to knowing Mr Boucher personally and also raised the matter of a possible conflict of interest.

The Greens said they would be calling on Mr Perry to step aside temporarily until after the judgement had been registered and he had given reassurance there was no conflict between his financial issues and his role as a minister.

Meath West TD Peader Tóibín said Mr Perry should now consider his position and based his argument on Mr Perry’s performance to date as Minister.

Separately, Minister for Agriculture Simon Coveney today rejected calls that Mr Perry should step aside and repeated the Government’s line that he has unparalleled experience of running a small business.