People have a right to be heard on Europe 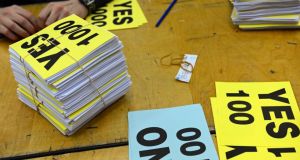 Speaking against an extension of the electoral franchises in the United Kingdom of Great Britain and Ireland in the middle of the 19th century, a Tory MP warned that the initiative “is simply hereafter to overwhelm the property and intelligence of the country by force of numbers”.

Lord Palmerston, who was twice prime minister, said it would cause the “introducing of men into the House of Commons who would be following impulses not congenial to our institutions”.

The franchise had been diminished with the introduction of Catholic emancipation in 1828, when the 40-shilling property qualification for entitlement to vote was raised to £10. The county electoral register in Ireland was reduced from 216,000 to 37,000 – the corrupt boroughs were left untouched. So, in exchange for enfranchising richer Catholics, thousands of poorer Protestants were disenfranchised.

The great liberal philosopher and the author of On Liberty, John Stuart Mill, was an MP then. He said in the debate: “I regard it as wholly inadmissible that any person should participate in the suffrage without being able to read, write and, I will add, perform the common operations of arithmetic.”

He proposed: “All graduates of universities, all persons who have passed creditably through higher schools, all members of the liberal professions and perhaps some others should be specially registered so that they could cast extra votes because of these qualifications.”

Whereas there is now an acquiescence in the formal entitlement of men and women to vote, there is still a resistance to the idea that everyone has an entitlement to participate equally in the governance of society. Just recently, one of our wise “elders”, Peter Sutherland, expressed dismay at the practice here of holding referendums on EU treaty changes – that is changes to the constitution of the European Union, which we joined 40 years ago. He is also perturbed by the courts’ insistence that in referendums big money cannot run the show and broadcasters have to be fair to both sides in a debate. His views are echoed by aspirant elders Gavin Barrett, a lecturer in law at UCD, and Leo Varadkar, a Minister in our Government.

‘Elder’ qualifications
Peter Sutherland has all the qualifications to be an “elder”: ex-Gonzaga; former prop forward for UCD and Lansdowne; a former attorney general; a former EU commissioner; a former director general of the General Agreement on Tariffs and Trade (now the World Trade Organisation), once credited with being the father of globalisation; chairman of Goldman Sachs International; former chairman of BP; a high-ranking member of the Bilderberg Group; honorary chairman of the Trilateral Commission; and with more honorary doctorates than Denis O’Brien has mobile phone franchises.

The disdain for the people’s involvement in decisions as momentous as constitutional changes to the European Union is firmly in the tradition of those 19th century grandees who feared that an extension of the franchise would “overwhelm the property and intelligence of the country by force of numbers”.

But far from curtailing democracy we need to broaden and refresh it.

The first constitution of this State, that of 1922, inspired perhaps by the revolutionary impulse of some of its founders, provided for a referendum by the people on legislation or on constitutional amendments if a petition to that effect was signed by 75,000 voters. That was revoked in 1928 and not included in the 1937 Constitution. But why not now again?

Profound changes were made to this society by two decisions in the last five years – the September 2008 bank guarantee and the November 2010 EU bail-out capitulation – without endorsement, directly or indirectly, by the people. Can that be satisfactory?

We now have a form of representative democracy whereby almost the sole independent function of our elected representatives is to choose a Taoiseach, after which the government formed by the Taoiseach is effectively immune from accountability during its period in office. A government that regards election promises as disposable at will. Is it tolerable that the people are denied, effectively, any means of changing that?

We now know that the philosopher kings who managed our affairs were incompetent nincompoops. It is time for the sans-culottes to rule.