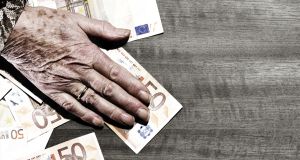 The pensions paid to civil servants at the very top of the service’s income scale would cost more than €4 million. So they are among society’s very wealthy.

According to figures released by the Minister for Public Expenditure and Reform, Paschal Donohoe, to Sinn Féin’s Pearse Doherty, one civil servant received a lump sum payment of between €300,000 and €350,000 in 2013.

An actuary who did not want to be named and who put these figures through an annuity calculator supplied by a major financial services firm, came up with a cost of €5 million for such a pension for a person retiring aged 65. It would cost €6.4 million if the person was aged 60 when he retired. The lump sum payment would not be included, so is additional to the value of the pension package.

In fact bond returns are such that the annuities market is practically closed. These days there is a lot of talk about SORP, or statements of reasonable projections, which look at how much a person would be advised to put aside if they wanted a particular pension when they reached retiring age.

Working with the calculator on the website of the Pensions Authority, the actuary got figures for how much people would have to put aside each year if they aspired to have pensions such as the ones mentioned above, when they reached ages 60 and 65. Again the lump sums would be additional.

If a young person aspired towards a pension of €24,000 per year, which is just below the average for retired civil servants last year, and wanted to retire aged 65, they would have to start investing €15,750 annually from age 25. That is the equivalent of one third of gross income. If they wanted to retire at 60 and started investing at age 20, the starting contribution would be €17,850.

If the figures appear enormous it is because they are. Pensions are extraordinarily expensive and although many public service employees now feel they pay for the retirement income, the fact is that the contributions they make bear no relation to the actual cost. There doesn’t appear to be any appetite to address the issue. It is a classic case of the short-term demands of parliamentary democracy finding it near impossible to introduce the policy changes needed to avert a crisis that is inevitable in the medium term.

Similar considerations apply to the State pension, which the Government looks set to increase by €5 in the coming Budget. According to the actuary, the equivalent of a contributory State pension would cost approximately €500,000 to buy. Demographic trends indicate that the system is unsustainable.