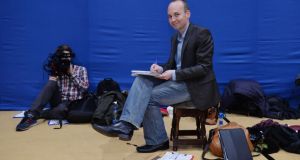 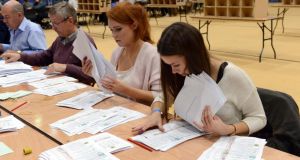 Counting gets under way in the Dublin South West by-election as boxes are opened at the National Basketball Arena in Tallaght this morning. Photograph: Eric Luke / The Irish Times. 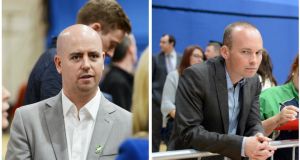 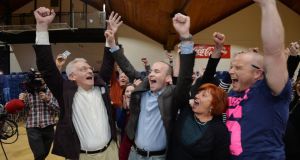 He defeated the hot favourite, Sinn Fein’s Cathal King on the eight count, having trailed him earlier. Mr Murphy, a former Socialist Party MEP, had campaigned strongly against the water charges, arguing that Sinn Fein could not be trusted to abolish them if they entered government.

“This was a byelection that began and ended with the water charges and Paul Murphy won the day on the issue,’’ said a long-time observer of politics in the constituency.

When Mr Murphy was declared elected at the National Basketball Arena in Tallaght, his supporters and himself shouted their opposition to the charges.

Mr Murphy said his victory signalled opposition to the water charges and the Government’s austerity policies. “We saw the biggest demonstration in a long time against the charges today,’’ he said, in reference to a protest in Dublin.

Sinn Féin leader Gerry Adams said Dublin South West was a volatile constituency. “I note with some wryness that pundits were saying Sinn Fein was going to romp home,’’ he added. “We never said that, because we knew that it was going to come down to transfers.’’

From the opening of the boxes this morning, it was clear that it was going to be a battle between Mr King and Mr Murphy, with none of the other candidates remotely in contention.

After the first count, Mr Murphy’s challenge was to overcome Mr King’s lead of 748 votes. In subsequent counts, Mr Murphy narrowed the gap and, after the seventh count, he had it reduced to 291 votes.

Fine Gael’s Cait Keane and Independent Ronan McMahon, who did well to stay in the race until then, were eliminated and more than 7,000 votes were then transferred. As party activists monitored the eight count, it was clear that Mr Murphy would secure the transfers to pave the way for a comfortable victory.

He secured 1,839 votes, with Mr King receiving 982, bringing their respective votes to 9,565 and 8,999 and giving Mr Murphy a 566-vote margin of victory. He was declared elected without reaching the quota.

From the outset of the byelection campaign, the major parties privately conceded that the battle would be between Mr Murphy and Mr King, with the Sinn Féin candidate the firm favourite. Mr Murphy now joins Socialist Party TDs Joe Higgins, who was present at the count, and Ruth Coppinger, both from the Dublin West constituency, in the Dail.

The Dublin South West vacancy was created by the election to the European parliament of Fine Gael TD and former minister of state Brian Hayes. The other TDs for the constituency are Labour’s Pat Rabbitte and Eamonn Moloney and Sinn Féin’s Sean Crowe. It will be a five-seater at the next general election.