Seanad can hold up legislation for 90 days 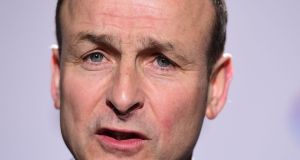 Fianna Fáil leader Micheál Martin. In 2011 Senators resisted his attempts to get long-standing Senators to stand down

The prospect of a minority government failing to control the new Seanad could influence Fine Gael and Fianna Fáil to consider a coalition deal, sources in both parties have conceded.

While the Seanad has no power to block the budget it can hold up routine legislation for 90 days, which could pose significant problems for a new administration.

Fianna Fáil remains publicly adamant that it will not coalesce with Fine Gael despite pressure mounting to make a deal following the inconclusive result of last month’s general election.

A minority government would inevitably be in a minority position in the Seanad as well as the Dáil, while a Fine Gael-Fianna Fáil coalition would secure a majority by the taoiseach’s 11 nominees.

“Failing to have a Seanad majority could make life difficult if we were in government and in a minority position in the Dáil,’’ said a Fine Gael source.

A Fianna Fáil source predicted the opposition in the Seanad would make “endless mischief’’ if there was a minority government. “It would put us in a difficult position if we were the ones keeping the government in power in the other chamber.’’

The 60-member Seanad is made up of 43 members elected on vocational panels from an electorate made up of the country’s 949 county councillors, the 158 members of the new Dáil and members of the outgoing Seanad.

A Seanad without a government majority would likely elect an opposition member to the coveted post of cathaoirleach, further complicating matters.

Meanwhile, it has emerged that, unlike in the aftermath of the 2011 general election, Fianna Fáil leader Micheál Martin and party headquarters have not opposed the nomination of long-serving career Senators in favour of candidates being groomed to win Dáil seats.

Back then Senators resisted Mr Martin’s attempts to get them to stand down after the party’s disastrous general election when the party was anxious to rebuild in several constituencies with young Senators with Dáil ambitions. It led to considerable tension between the Senators and Mr Martin at the time.

With the retirement of Fianna Fáil Senators Jim Walsh, Mary White and Labhras 0 Murchu, the departure of Averil Power from the party, and the election to the Dáil of Senators Thomas Byrne, Darragh O’Brien and Marc MacSharry, the way is clear for new blood