Our man in Havana: Gilmore on the ‘art of the possible’ 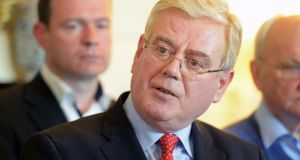 Eamon Gilmore: “As we know from our own experience in Ireland, you can set target dates, but you can’t always get everything into the jar by that date.” Photograph: Eric Luke.

When it comes to the Colombian peace talks, Eamon Gilmore is our man in Havana. On Monday the former tánaiste and Labour leader walked into the Floridita Bar, famous for Ernest Hemingway’s daiquiri-swilling carousing, in the Cuban capital’s old town with the look of a man who has anything but the challenge of forming a new Irish government on his mind.

Gilmore has plenty to keep him busy in Havana as the European Union’s envoy to the Colombian negotiations in Cuba to resolve one of the world’s longest and bloodiest wars. “I don’t miss it, actually,” says Gilmore of Irish politics in an interview at the EU’s outpost in Havana.

This week has been busy for the former Dún Laoghaire TD, who has been in his new role since last October. Barack Obama’s visit to Cuba, the first by a US president in 88 years, set a double target for a Colombian deal.

The Bogota government and the country’s largest left-wing rebel group, the Revolutionary Armed Forces of Colombia (Farc), have been talking since 2012 about ending the 52-year war.

The parties picked a March 23rd deadline for a deal and Obama’s visit raised the possibility that it might be happen before he flew out on Tuesday, making his visit to the communist state even more historic.

“That was probably a bit of overoptimistic speculation because the Obama visit was a bilateral visit to Cuba,” says Gilmore.

Gilmore is optimistic that an agreement will be reached, despite final negotiations being the most difficult. It involves “end of conflict issues”, he says, that were “put into the freezer” early in the talks process to be resolved towards the very end. The issues include, as in Northern Ireland, disarmament.

“What is important is actually concluding the agreement, and as we know from our own experience in Ireland, you can set target dates, but you can’t always get everything into the jar by that date,” he says.

He says he is asked regularly by the parties about Northern Ireland, seeing if the Irish process is a template. There are parallels but big differences too, he says: Northern Ireland’s Troubles were about national identity; Colombia’s centre on land.

The scale is different too. About 220,000 people have been killed and six million displaced from their homes during Colombia’s war.

Government formation Another set of negotiations that Gilmore is watching are about the formation of a government at home.

The election produced a very large number of TDs “who do not want to be in government”, he says.

“The people have elected an opposition, not a government. The election has produced a lot of TDs who want to talk about their policies but really when it comes down to it don’t want to do anything about them or certainly don’t want to take the responsibility of government.”

Opposition is “politically a more comfortable place”, he says.

Gilmore is no clearer than most others on what government can be formed.

“I don’t know and I don’t think anybody knows. The only people who I think probably do know are the Taoiseach and Micheál Martin,” he said.

Gilmore says time is of the essence given how caretakers do not carry the authority of a mandate, for example at the European Council.

“If weeks become months then you have the difficulty of political uncertainty and the implications that that has for investment,” he says.

He agrees with Joan Burton, his successor as Labour leader, that the party needs time out of government to regroup.

“As a party we need to rebuild and recover, and that can only be done outside government,” he says.

He declines to say whether the party would have fared better in the election had he not stood down as leader in 2014. “I am the last person in the world who can answer that question,” he says.

He stands over his and Labour’s record in government bringing the State back from the brink of near-bankruptcy, recognising that politics is “the art of the possible” and not always popular.

Referring to the Islamic State attacks in Brussels on Tuesday, Gilmore pointed out that the Colombian talks were a rare glimpse of the art of the possible in finding resolution to a long-standing conflict.

“The potential for ending the conflict in Colombia is one of the bright lights on the global horizon at the moment,” he says.