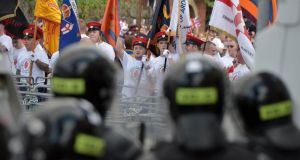 Loyalists break through a police barrier as they are prevented from progressing on the return journey towards the controversial Ardoyne flashpoint the Twelfth of July parade on July 13, 2015 in Belfast. Photograph: Charles McQuillan/Getty Images

Loyalists hurled missiles at PSNI officers yesterday evening when Orangemen were prevented from parading past the Ardoyne shops in North Belfast.

Police erected steel barriers in the Woodvale Road about 300 metres from the shops to prevent more than 3.000 Orangemen, loyalist bands, members and supporters parading on up the road to the shops.

There was a stand-off between police and protesters, with demonstrators taunting and shouting at the PSNI officers when the parade arrived at the barriers shortly before 7.30pm. Tensions were high and after eight minutes missiles started raining down on police and reporters who were covering the parade.

Some of the demonstrators sang the Sash and the Famine Song – “the Famine is over why don’t you go home” – as others pelted police with beer bottles, full cans, bolts and other missiles. Police quickly moved in with Land Rovers to strengthen the lines.

During the incident it appeared that a young girl was struck by a car. Police had to turn over the car onto its side so they could access the girl. The girl, who police said was 15, was brought to hospital. The driver of the car was arrested.

Local Sinn Féin Assembly member Gerry Kelly spoke to her family and said he understood her injuries were not life threatening.

A number of missiles were fired at police by nationalists as they sought to maintain the scene.

A police helicopter hovered overhead while police dogs and two large water cannon trucks were placed on standby at the top of the Woodvale Road. There was a huge police presence at the scene, with many in full riot gear and bearing shields to protect them from the bottles and cans.

As well as the standoff on Woodvale Road there was also trouble at the top of Twaddell Avenue where loyalists threw heavy bricks at police lines. Missiles were also thrown in the direction of nationalists gathered at the shops. Police responded with water cannons and a number of police officers suffered injuries.

Earlier, the morning feeder parade to the main Belfast parade, which was allowed by the Parades Commission, concluded peacefully.

Two republican protests were staged in the morning. The Crumlin and Ardoyne Residents’ Association (Cara), which supports Sinn Féin, unveiled a large banner stating “Resolution is Possible” as the parade went by.

The Greater Ardoyne Residents Coalition (Garc), which is viewed as being sympathetic to dissident republicanism, also protested at the shops. Protesters at that demonstration, which was more heavily policed, carried posters with messages such as “March where you’re welcome”, “Treat our community with respect” and “No parades, no violence”.

One protester was arrested and charged with assaulting police and disorderly behaviour. He was released on bail and ordered to stay from further protests.

The PSNI Chief Constable George Hamilton, who was at Ardoyne in the morning, warned that “if people break the law they will be brought before the courts”.

Mr Kelly last night appealed for calm and said other political leaders should do likewise.

The Orange Order condemned those engaging in violence and also appealed for calm in north Belfast.

“Those involved in violence should desist. It is not only counterproductive but also plain wrong. Such actions are only strengthening the hand of those who wish to further curtail our parades,” a spokesman said.