With all due respect, deputy, you’re an awful ****er

Gurriers, thugs, rats and buffoons: think what you like of our TDs but don’t tell it to them in the chambers of the Oireachtas 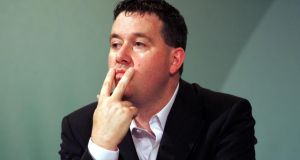 Order, order: former Green Party TD Paul Gogarty, who used unparliamentary language in the Dáil in 2009. He immediately apologised to Emmet Stagg, at whom he had directed his outburst. Photograph: Eric Luke

The outburst of intemperate language and inappropriate behaviour in the Houses of the Oireachtas in recent weeks has generated a lot of media attention but such activities are as old as parliamentary democracy itself.

Since the establishment of the Dáil in 1919, heated words have frequently featured in debate despite a strict code governing the use of language.

Ironically, it emerged that the offending word was not on the list of those banned in the House, as set out in Salient Rulings of the Chair, probably because it had never before been used in the chamber. Among the words that are on the banned list are: liar, brat, buffoon, chancer, communist, corner boy, coward, fascist, gurrier, hypocrite, rat. It is also disorderly of a deputy to suggest that another TD is lying or drunk. The use of the word “handbagging”, particularly with reference to a woman member of either House, was also put on the banned list after a number of women TDs complained about it.

In fact far worse things than any of the words on the banned list have been said in the Dáil and the Seanad over the years.

What must rank as one of the most offensive statements ever made in the Dáil was a declaration by the then Independent, and later Fine Gael, TD Oliver J Flanagan in 1943, in the midst of the second World War: “There is one thing that Germany did, and that was to rout the Jews out of their country. Until we rout the Jews out of this country it does not matter a hair’s breadth what orders you make. Where the bees are there is the honey, and where the Jews are there is the money.”

Cork Fianna Fáil TD and IRA veteran Martin Corry made a number of poisonous remarks during his long career. In 1928 he referred, in deeply offensive terms, to people of African origin and, a decade later, came up with the following solution to partition. “I am in favour of storing up sufficient poison gas, so that when you get the wind in the right direction you can start at the Border let it travel, and follow it.”

In 1968 he made vicious personal attacks on Fine Gael TDs Tom Fitzpatrick and Gerry L’Estrange. Referring to rumours that both were illegitimate, he said they were “chasing around four or five counties looking to know whom they would blame for their own parentage”.

When objections were raised, Corry said: “If they do not like it, I am a fairly old man, but I will take on the two of them outside the doors of this House and prove it . . . I often dealt with pups like them before . . . bloody pair of bastards.”

‘Malicious reporting’
The Ceann Comhairle pretended not to hear the comments while minister for local government Kevin Boland backed Corry. The remarks were regarded as so offensive that they were not carried in the newspapers the following day. However, when Boland complained two weeks later that The Irish Times was engaged in “malicious reporting” of the Dáil, the newspaper published the exchange in a leader column.

Boland himself made an oft-quoted attack in the Dáil in March 1970 on conservationists campaigning to preserve Georgian Dublin, deriding them as “belted earls and their ladies and left-wing intellectuals”. Two months later he attacked his party leader and taoiseach Jack Lynch in the robust terms accusing him of “felon setting” and “treachery”.

It was a time of strongly held opinions. Limerick Labour TD Stevie Coughlan said on March 29th, 1971: “If we resort to the despicable practices of contraception, divorce and abortion we shall be finished as a nation.” Then, as now, debate on “moral issues” provoked intense emotions.

Charles Haughey also provoked intense reactions during his decades in politics. On his nomination as taoiseach in December 1979 Fine Gael leader Garret FitzGerald questioned Haughey’s fitness for office, describing him as having “a flawed pedigree”.

In November 1990 Labour leader Dick Spring went further: “This debate essentially is about the evil spirit that controls one political party in this Republic . . the cancer that is eating away at our body politic and the virus that has caused that cancer: an taoiseach, Charles J Haughey.”

A few years later, when Spring was in coalition with Fianna Fáil, Progressive Democrat TD Michael McDowell turned the tables and accused the Labour leader of being “morally brain dead”.

Those insults make Bertie Ahern’s description of Fine Gael TD Gay Mitchell in December 1994 as “a waffler” seem pretty harmless. It was the bitter tone in which Ahern uttered the word that made the exchange newsworthy.

An outbreak of insults in the Dáil can erupt without warning. On February 13th, 2002, a number of TDs got stuck into each other as an innocuous debate suddenly spiralled out of control. It began when Fianna Fáil’s Dick Roche allegedly described Labour TD Liz McManus as a “pro-abortionist” but Ceann Comhairle Séamus Pattison didn’t hear the remark.

Fine Gael’s Nora Owen waded in: “A thug was allowed to insult another member of this House. It is a disgrace.” Roche then described Fine Gael’s Michael Ring as “a thug and a gurrier.” After disorder and a suspension of the House, Labour’s Pat Rabbitte wound up by describing Roche as “a slithering political lizard”.

The trading of insults, some unpleasant and others unacceptable, is part of the price we pay for free speech in a democratic parliament.

Bloomberg ranks New Zealand top in fight against Covid-19 - but how did Ireland fare?