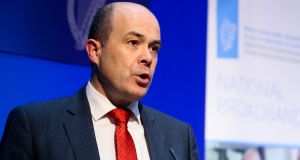 Local authorities have been warned in the Dáil by Minister for Communications Denis Naughten not to impose development charges for telecommunications work.

“I want to make it quite clear to the House that I will publicly name those local authorities if they do not stop doing this,’’ he said.

The Minister was replying on Wednesday to Fianna Fáil TD James Browne, who said he hoped no local authority was holding up the development of broadband, because broadband was absolutely critical for community development.

Mr Browne said people were frustrated by the absence of broadband.

He said areas like Enniscorthy, Wexford town, New Ross and Gorey in Co Wexford were blighted by a lack of broadband.

“I certainly hope to see it developed as soon as possible for all these areas, so we can free up rural communities to maximise their talents, opportunities and ideas, which are being held back at the moment,’’ Mr Browne added.

Mr Naughten said he was working with Minister for Planning and Local Government Eoghan Murphy for exemptions for 4G antennae and other telecommunications infrastructure, in order to fast-track the planning process.