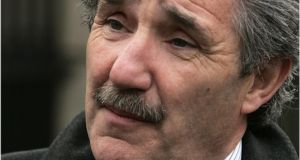 Taoiseach Enda Kenny has said his pledge to hold a citizens’ assembly to debate abortion if re-elected to government is the way to deal with the issue in a “respectful and rational way”.

He also said that if the assembly produced proposals for the Dáil, Fine Gael TDs would have a free vote.

Mr Kenny was opposed to abortion on demand but “I do understand insofar as I can, the difficulties that many people have faced because of a variety of circumstances”.

He was responding to Independent TD John Halligan who said it was “inhuman” for Ireland to export its abortion problem. Mr Halligan asked the Taoiseach would he instruct each of his party’s general election candidates to “publicly state their position on repealing the Eighth Amendment” to the Constitution.

During Dáil Leaders’ Questions, Mr Halligan said the Taoiseach had previously indicated there would be a free vote, but he regretted there had not been a free vote when TDs Ruth Coppinger and Clare Daly proposed Bills to legislate for abortion.

Mr Kenny told him: “I have committed to what I think we can do in a respectful and rational way about this.”

The citizens’ assembly would be set up within six months of a new Government, composed “properly of a fair regional and gender spread”, to look at the question of the Eighth Amendment.

He highlighted the case of a 32-year-old Waterford woman, Anna Maria, who flew to London where she was picked up by a minibus with eight other women, all of whom were aged 17 to 19, some of whom were vomiting and weeping.

“What frightened her most was the silence on that minibus as they were taken to the clinic . . . as well as the isolation and the loneliness.”

He said many young women did not tell their parents or friends. “It is not the procedure that does the psychological damage to them. Believe it or not, all the indications are that it is the fact of having to make that journey on their own that does so.”

Mr Kenny said these circumstances caused great difficulty for many people. “That is why I believe we should have a respectful, rational and sensitive discussion.”