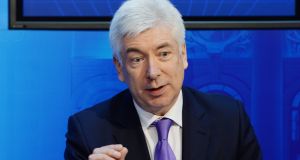 The Taoiseach has inisted a Government election pledge to extend free GP care to people with long-term illnesses will go ahead. He said Minister of State for Health Alex White (above) is to report to the Cabinet on the matter by the end of this month. Photograph: Alan Betson.

Taoiseach Enda Kenny has inisted that the Government’s election commitment to extend free GP care to almost 60,000 people with long-term illnesses will go ahead.

Mr Kenny said Minister of State for Health Alex White would report to the Cabinet on the matter by the end of this month.

“He has validly pointed out it is not effective to put in place a legal, administrative, bureaucratic assessment system for a sector dealing with long-term illness and then move on to the other sectors,’’ he added.

Mr White, he said, wanted to look at the entire free GP scheme and he supported him in that.

Mr Kenny told the Dáil this afternoon that the Government was fully committed to delivering free GP care in its first term of office and no decision had been taken to go back on that.

He added that when Mr White had come before the Cabinet sub-committee on health recently, he explained it would be necessary to introduce complex legislation to provide free GP care to those with long-term illnesses.

Mr White, the Taoiseach said, had pointed out that the legislation required would have to have a legal basis for eligibility based principally on means, income and residency. The first phase, based on a medical condition, required a new legal and administrative arrangement.

Mr White, he added, had said it would be far more effective to look at the longer strategy in implementing the roll out of free GP care.

Fianna Fáil leader Micheal Martin said promises had been made again and again on the issue and then broken. He said Labour was providing cover to the Government and Dr Reilly on the issue.

“What has to happen, Taoiseach, for you to realise what your Cabinet colleagues private acknowledge, and what the rest of the country has known and understood for quite some time, that Minister James Reilly is not the man to lead one of the most important departments in this country ,’’ he added.

Mr Kenny said Mr Martin had said some years ago that it took longer to get things off the ground in the Department of Health than in any other department.

Sinn Féin leader Gerry Adams said it was not credible that it took two years to discover legal difficulties.