Taoiseach criticised for lack of ‘understanding’ for non-Irish speakers 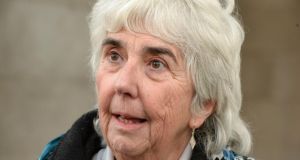 Maureen O’Sullivan: she repeated her call in the Dáil that every primary school in the State should be a Gaelscoil or all-Irish school for its first two or three years to increase the number of Irish speakers. Photograph: Cyril Byrne/The Irish Times

Taoiseach Enda Kenny should have “more understanding” for people who do not have his knowledge of the Irish language, the Dáil has heard. Independent TD Maureen O’Sullivan made the criticism during a debate on the Irish language 20-year strategy.

She was referring to Mr Kenny’s insistence on responding in Irish to Independent TD Mick Wallace during leaders’ questions, despite Mr Wallace asking him to answer in English. “I don’t agree with what happened to Deputy Wallace,” she said, of Mr Kenny’s response to the Wexford TD.

Last year there was a row when Minister for Jobs Richard Bruton answered questions in English because his Irish was not fluent enough.

Mr Wallace had asked the Taoiseach if he would raise human rights issues with US president Barack Obama when he met him at the White House next week. When Mr Kenny began to respond in Irish, Mr Wallace asked him to speak in English. The Taoiseach told him to put on earphones and to use the translation system. In English, Mr Kenny said: “This is our national language and this is Lá na Gaeilge, nó sin a deirtear liom” (or this is what I’ve been told).

During the debate on the strategy, Ms O’Sullivan repeated her call that every primary school in the State should be a Gaelscoil or all-Irish school for its first two or three years to increase the number of Irish speakers.

Fianna Fáil’s Éamon Ó Cuív said, however, that while the Taoiseach spoke Irish, “he has no respect for the Irish language”.

One of the proposals in the 20-year strategy was to have a Cabinet Minister responsible for the language but that hadn’t happened. “We’ll fix that when we’re back in Government”.

Mr Ó Cuív and other TDs praised Minister of State for Gaeltacht Affairs Joe McHugh for his personal efforts to learn the language. The Minister said “solid, steady progress” was being made in the language. The strategy aims to increase the number of people speaking Irish as their main language from 20,000 to 250,000 but Socialist TD Ruth Coppinger said such plans were “pie in the sky” and claimed that “the Gaeltacht is being slowly murdered”.

Independent TD Michael Healy-Rae said Irish should remain compulsory up to Leaving Certificate as there was “no other way to ensure they will study and embrace it”.