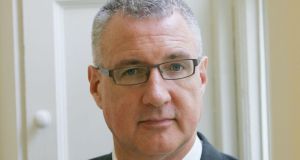 Prof John Crown: spoke of number of people he knew who had died through self-harm. Photograph: Bryan O’Brien

“These included a few nurses, medical students, doctors and world-famous cancer experts. There were also a couple of patients, or family members of patients, as well as a relative of mine.’’

Speaking during a Seanad debate on suicide, Prof Crown said each death represented a tragedy, “and these people came from all strata of society and age groups, although the average age was very young’’.

John Gilroy (Lab) said the State’s 10-year-old suicide prevention strategy had not worked. “It has not delivered objectives and it was flawed in its initiation because it did not set targets or direct responsibility to named individuals. It did not have a review period.’’

He said there seemed to be a hostility from some service delivery agents to fully engaging with community and voluntary groups.

Minister of State for Health Kathleen Lynch said the Government had been working to move from the old institutional model of service delivery to comprehensive care in a variety of settings, including the home, the community and in hospital.

“This common objective requires a change in attitudes generally towards mental health, especially in eliminating the stigma associated with mental illness, as well as the prioritisation of the limited resources which are available to us.’’