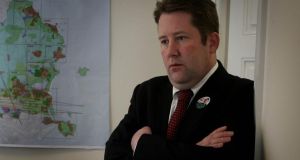 The State’s 25.1 per cent shareholding in Aer Lingus cannot currently guarantee the retention of the airline’s Heathrow airport slots, Minister for Transport Paschal Donohoe has told the Seanad.

The airline has 24 slots at Heathrow, guaranteeing it the right to take off and land there, with matching rights at Irish airports. Mr Donohoe said that under the conditions of a specific mechanism in the Aer Lingus articles of association, if disposal of a slot is considered, “the voting threshold to prevent such disposal must be greater than the percentage of the company shares held by the Minister for Finance plus 5 per cent”.

The voting threshold is 30.1 per cent; this means “the ability of the State shareholding to block a disposal of slots is therefore not guaranteed under the existing mechanism”.

In a short debate in the Upper House on the proposed IAG offer for the carrier, the Minister also confirmed that Credit Suisse and IBI Corporate Finance, part of the Bank of Ireland Group, have been selected as the financial advisers to the Government on the proposed sale, and McCann Fitzgerald is the selected legal adviser.

Fianna Fáil Seanad leader Darragh O’Brien said it was “no coincidence that the IAG takeover bid for Aer Lingus was made after the Government effectively wiped away the liabilities in the Aer Lingus pension scheme”.

Labour Senator John Whelan said Irish people had not been served well by the disposal of State assets and Aer Lingus was not worth giving up for a €300 million “pittance”.

Independent Senator Seán Barrett said that British Airways, “overshadowed in its native jurisdiction by easyJet and Ryanair”, was not a suitable candidate to takeover Aer Lingus.

He added that it was an “appalling example of extra-territoriality” and said the amalgamation of previous national airlines was an anti-competitive development in European aviation.