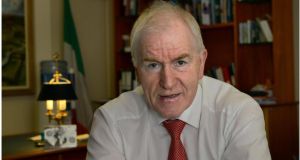 Jimmy Deenihan, Minister for Arts Heritage and the Gaeltacht: “The evolution of public assemblies through representative government to modern democracy in Ireland is a worthy topic for discussion.” Photograph: Brenda Fitzsimons/The Irish Times

The decision to have a series of Seanad statements on the 750th anniversary of the first known Irish parliament was criticised in the House yesterday. Minister for Heritage Jimmy Deenihan said it was great to see the interest the House was showing in tracing the foundations of Ireland’s parliamentary legacy over the centuries, particularly the assembly which met in the then important administrative and religious centre of Castledermot, Co Kildare, on June 18th, 1264.

“All of us will agree that the evolution of public assemblies through representative government to modern democracy in Ireland is a worthy topic for discussion,” he added.

However, Sinn Féin’s Trevor Ó Clochartaigh said Senators were doing themselves no favours by scheduling such items. It was an obscure event that happened 750 years ago which, he believed, was wrongly described as the first Irish parliament.

“There was no such thing,” he said. “It was a meeting of the English colonisers who occupied the shrinking Pale, a century after the Anglo-Norman invasion of Ireland. These were the descendants of the robber barons and their followers who attempted to grab Ireland for their own profit and for the English crown,” Mr Ó Clochartaigh added.

Thomas Byrne (FF) described the series of statements as “madness”, adding that it had no relationship with the people of Ireland at the time. “It was the start of the subjugation of the country.”

Fine Gael Seanad leader Maurice Cummins said he was happy to have the series of statements. The first recorded sitting of the Irish parliament was a unique milestone in the history of national and international parliamentary democracy.

Ivana Bacik (Labour) said it was an important commemoration and she thanked Mr Deenihan for attending in the Seanad.

There was a record of the meeting in the register of the key diocesan archives of Dublin and Glendalough, from the 12th to the 14th centuries, normally on display to the public in the crypt of Christ Church Cathedral in Dublin.